Award-winning journalist, and University of Liverpool alumnus, Jon Snow was on campus with an ITN film crew to shoot footage for an upcoming documentary.

The show, presented by the Channel Four News anchorman, will deliver an overview of 2011, described by Jon Snow as ‘the year of protest’.

It was Jon’s first return trip to the University since being awarded an honorary degree this summer, more than 40 years after being excluded for playing a major part in a six week occupation of the then Senate House Building in opposition to the apartheid regime in South Africa.

Jon was two years into a law degree in 1970. He told students the exclusion was a turning point in his life and stopped him becoming a ‘very mediocre lawyer’.

Instead, he went out to Uganda and returned to work with London’s homeless, before beginning a glittering career in broadcast journalism.

Part of the documentary was shot in what is now the Sydney Jones Library, on the spot where Jon and around 250 fellow students slept, ate and maintained their stand for weeks.

It was the first time he had entered the building since that time, and he was visibly moved to return. 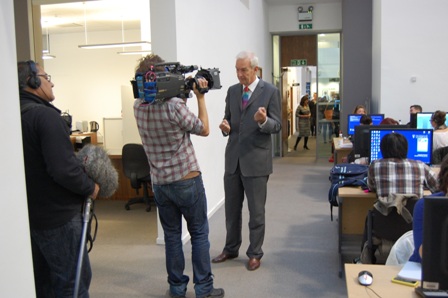 From there, Jon made his way to the Guild, chatting to those he passed along the way and taking time to enquire about the causes that occupy 21st century campuses, before sitting down to lunch with around a dozen students from different disciplines.

The chat ranged from protest, to international issues, to modern life as a student, to politics and economics.

Speaking after lunch, Jon said: “It was completely uplifting. There’s nothing more stimulating than thoughtful students, and I’m also amazed at how well-dressed they are. They seem much more hard-working than we were.”

Reflecting on the substance of the documentary, and his own history of protest, Jon said: “I think people take the business of studying more seriously now than we did. I don’t think they feel they can afford the kind of luxury of protest we had, and if they do, it’s about things which affect them directly.”

The documentary is currently scheduled to air on Wednesday 28 December at 8pm. 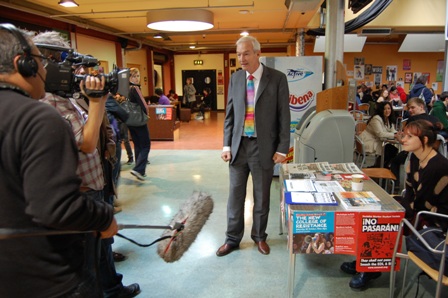 2 thoughts on “Jon Snow on campus for ITN documentary”