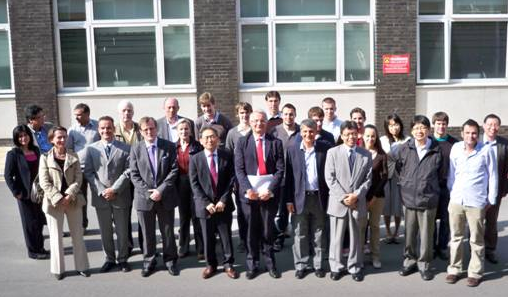 The second joint interdisciplinary RIKEN-Liverpool research symposium has been held at the University of Liverpool, celebrating the growing international collaboration between the two institutions.

Presentations by senior visiting scientists from RIKEN representing three campuses, Harima, Yokohama and Wako, and senior academics from the Faculty of Science and Engineering and the Faculty of Health and Life Sciences spoke on topics ranging from exotic ion beams to personalised medicine.

Participants were also able to hear first-hand accounts of the world’s second x-ray laser, SACLA, which came on-line at the SPring-8 site Harima this summer and where one of Liverpool’s PhD students, under the joint RIKEN-Liverpool programme, is already working.

Also attending were many of the joint-PhD students who were able to interact with their RIKEN supervisors for the first time, and who will be going to different RIKEN laboratories in 2012 in time for the next symposium, due to be held in Japan.

The delegation from RIKEN was led by Professor Kenji Oeda, Executive Director of RIKEN and Professor Tetsuya Ishikawa, the Director of Harima RIKEN Institute.

At the concluding session the University of Liverpool Vice-Chancellor, Professor Sir Howard Newby, expressed his enthusiasm and strong support for such international partnerships where lead researchers are able to combine their intellect and ideas with the best in the world.