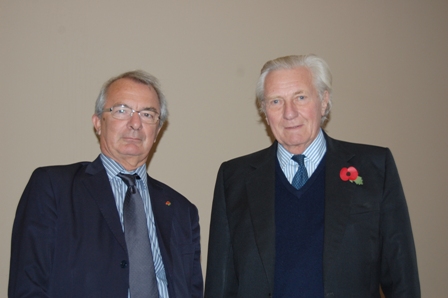 The Vice-Chancellor with Lord Heseltine

Lord Michael Heseltine has addressed a conference at the University of Liverpool to discuss the future of the economy in the North and how it can be more balanced with the rest of the country.

Lord Heseltine (Hon LLD 1990) was dubbed ‘Minister for Merseyside’ following the Toxteth riots in 1981, when he personally drove forward the regeneration of the city which included setting up the Merseyside Development Corporation, redeveloping the Albert Dock and creating the International Garden Festival site.

The Northern futures? Responses to the Coalitions Government’s policies and their impact on the North conference was organised in collaboration with the University and the Town and Country Planning Association and brought together experts in housing, planning and regeneration to discuss the impact of Government reforms in planning, housing and finance on the North.

The conference also considered how the country can achieve a more balanced economy which delivers long-term economic growth for both the North and South of England and addressed the pressures of demographics and resources.

John Flamson, Director of Partnerships and Innovation at the University, said: “Universities have a major role to play in driving innovation and future economic growth – a fact which the University of Liverpool has recognised through its lead role in the City Region’s knowledge economy.

“Lord Heseltine and Honorary Graduate Sir Terry Leahy’s recent report stressed the importance of rebalancing the economy and the University was pleased to bring this national event to Liverpool for what was a high-quality and creative exploration of one of the most pressing issues facing the UK.”