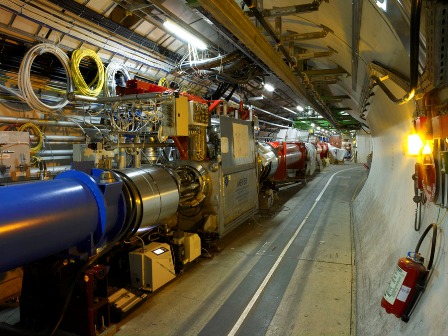 In September this year the OPERA collaboration presented results which seemed to imply that neutrinos beamed from CERN to the Gran Sasso National Laboratory some 760 kilometres away in Italy were travelling faster than light. New tests designed to reduce some potential systematic errors, have confirmed the accuracy of the earlier measurement, although more tests are need before the initial measurement can be confirmed or refuted.

Professor Themis Bowcock, Head of the University of Liverpool’s Particle Physics team, said: “One of the possible explanations of the OPERA experiment results that were released in September this year was that neutrinos could travel faster than the speed of light.

“OPERA measured the speed of neutrinos travelling between CERN in Geneva and Gran Sasso in Italy 730 km away. The experiment itself did not claim the observation of superluminal neutrinos but invited the physics community to subject their data to the severest scrutiny. Since then OPERA have rechecked many aspects of their analysis following valuable input from the scientific community.

“The experiment used a specially configured beam with very short beam pulses. The beam consisted of pulses three nanoseconds long separated by up to 524 nanaoseconds, allowing scientists to pin down the extraction time of the protons which generate the neutrinos with much greater precision. This eliminates the question mark over one of the main systematic errors associated with the speed measurement. Attention will now focus on synchronisation of the time references between CERN and Gran Sasso and other potential systematic errors.

“Should neutrinos travel faster than light, it would overthrow our ideas of the structure of space and time. Physicists are therefore treating the results of the experiment with caution and looking to test them again through other separate experiments to be certain of what these results are telling us.

“The University of Liverpool team is working in Japan, which can measure neutrino velocities over a slightly shorter distance (230km) from Tokai to Kamiokande on the T2K experiment.”

Professor Christos Touramanis, who heads the neutrino group at Liverpool, and is involved in scrutinizing the OPERA result as part of CERN’s scientific committee, said: “The test with short beam bunches excludes one possible source of systematic errors on the OPERA result, namely possible effects coming from the analysis of long beam bunches.

“There remain, however, a number of other possible effects to be checked. CERN plans to provide short beam bunches to LNGS in Italy in 2012. Experiments there, besides OPERA, will also do the measurement. This will allow further verification of the results in a semi-independent way.