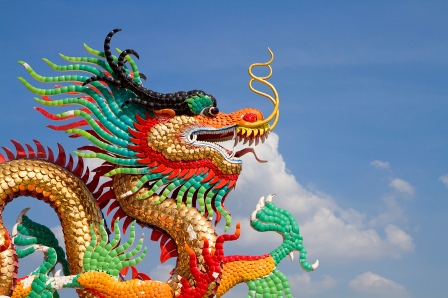 Chinese New Year is one of the oldest Chinese festivals and occurs between 21 January and 21 February to coincide with the first day of the lunar month. The Chinese Zodiac has 12 animal signs, one for each New Year. It is believed that people take on the characteristics of the animal from the year they were born.

Celebrations have begun to mark the 2012 Year of the Dragon, thought to symbolise character traits such as dominance, ambition, passion and independence. The dragon is a legendary creature that features in many myths, cultures, and literary texts, originating from both European folk traditions and Chinese culture.

The dragon is depicted with reptilian features, similar to the Komodo dragon today. Modern day mysteries surrounding the Komodo dragon mirror the fascination with its legendary equivalent. Researchers at the University of Liverpool, working with the Zoological Society of London, discovered that female Komodo dragons can produce offspring without any male contact. They can switch between asexual and sexual reproduction depending on the availability of a mate.

University lecturer in science fiction, Andy Sawyer, discusses how literature has maintained people’s fascination with the mythical creature: “Dragons exist in the myth, folklore and fiction of many cultures. Although they are often very different – the fire-breathing North European dragon is often associated with greed and malice, whilst the Chinese dragon usually symbolises strength and good luck – dragons also stand for awe and wonder in the face of the unknown, the mysterious and the terrible.

“In his famous essay, On Fairy-Stories, J R R Tolkien talks about how the idea of the dragon was significantly powerful to him just because they were unreal. He says: “Fantasy, the making or glimpsing of Other-worlds, was a profound desire. I desired dragons with a profound desire.” In The Hobbit, Bilbo’s quest is to steal gold from the dragon Smaug: a typical treasure-hoarding European dragon that perhaps represents the power of story.

“Ursula Le Guin, whose dragons in her Earthsea books, are among the most powerful in fiction asked, in a famous essay ‘Why are Americans afraid of Dragons?’ Her answer was that dragons, and other symbols of the fantastic, represent the freedom of the imagination. Both Tolkien and Le Guin present dragons as masters of language; sometimes wily and deceitful, but also sources of great wisdom.

“From Beowulf and the legends which inspired Wagner’s ‘Ring’ cycle, dragons have been part of some of the greatest works of literature. For modern fantasy and science fiction, dragons are now almost a compulsory part of the territory.

“Some of the most popular dragons in fiction include Anne McCaffery whose dragons in her Pern series are in fact genetically-modified fire-breathing lizards. Naomi Novik’s Temeraire series, in which dragons are part of the military forces in an alternate-history Napoleonic war, continues the tradition of a playful exploration of the idea that dragons could be ‘real’.

“Peter Dickinson’s The Flight of Dragons is a ‘speculative natural history book’ which suggests an evolutionary history and ecology for our idea of fire-breathing dragons. The idea that a small fire-breathing dragon could be a weapon is taken to humorous effect in Terry Pratchett’s Guards! Guards! where Sam Vimes of the Ankh-Morpork Night Watch threatens a mob with a burst of flame from a famously unstable ‘swamp dragon’ in a parody of Clint Eastwood’s ‘Dirty Harry’ character.

“At the University’s Special Collections and Archives we have a manuscript illustration taken from Historia ecclesiastica tripartite, 1478, by Falvius Magnus Aurelius Cassiodorus. The Cassiodorus volume is remarkable for its copious marginal annotations in a contemporary hand, dating approximately from the 15th or early 16th century. The annotations include Latin text, pointing hands, human faces, a crown, a bird – and a dragon.”