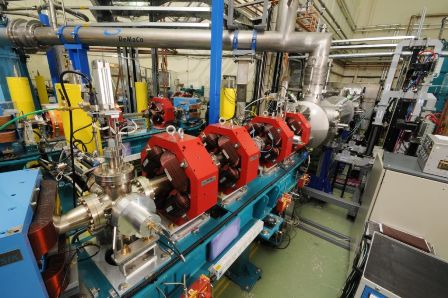 A team of scientists, led by the University of Liverpool, has made a major advance in the development of a diagnostic test for oesophageal cancer. The findings, achieved at the Science and Technology Facilities Council’s (STFC) ALICE accelerator facility, will lead to major improvements in the diagnosis, treatment and prognosis of the disease.

Oesophageal cancer is the ninth most common cancer in the world and around 8,000 people are diagnosed every year in the UK. It is an extremely difficult cancer to diagnose and is highly aggressive. Patients often present when the tumour is at an advanced stage, when surgical removal is no longer possible.

The aim of the research is to develop a diagnostic test by imaging tissue obtained by endoscopy from patients with a precursor condition called Barrett’s Oesophagus. Patients with Barrett’s Oesophagus are more at risk of developing this form of cancer and are regularly monitored to detect changes in their condition. If precancerous changes are detected in these patients, they can undergo potentially curative treatment without the need for major surgery because the tumours have been detected at a much earlier stage.

By using a unique and extremely intense source of infrared light (the InfraRed Free Electron Laser) at STFC’s ALICE accelerator, Professor Peter Weightman and his team from the School of Physical Sciences, have been able to image and carry out a blind study of historical endoscopic samples from patients with Barrett’s Oesophagus and, by detecting changes that took place in the samples, have developed a diagnostic test for the disease.

Minister for Universities and Science David Willetts said: “It’s incredibly impressive that the UK’s leading physics research can bring benefits for our health and wellbeing, as well as telling us more about the world around us. This work has the potential to save lives and revolutionise the diagnosis and treatment of oesophageal cancer. It also demonstrates the value of the Government’s investment in the Daresbury Laboratory. I wish the researchers well in taking these findings through to clinical use.”

Professor Weightman said: “Early diagnosis is the most important factor for improving the prognosis for patients with oesophageal cancer. But it is extremely hard to diagnose accurately – a false negative test can be fatal, whereas a false positive means unnecessary major surgery.”

Project collaborator, Professor Mark Pritchard, Consultant Gastroenterologist at Royal Liverpool University Hospital said: “Unfortunately, many patients with oesophageal cancer have inoperable cancers by the time of presentation, and even when surgery is performed it can often be unsuccessful. There is a real, pressing clinical need to develop new technologies which can detect early changes that occur within individual cells prior to cancer development. Using ALICE, Professor Weightman has been able to detect such cellular changes. This technology may have similar applications in other types of cancer which have a well established premalignant stage.”

Professor Weightman added: “Eventually we hope to develop a diagnostic test that can be used in an endoscope. The most promising approach may be to develop a test using the intense terahertz light also generated by ALICE. ALICE is Europe’s most intense band source of terahertz light and the only one in the world equipped with a tissue culture facility for research on cancer. This would lead to much cheaper and more efficient diagnosis of the disease. However this development is some way off. ”

STFC’s Professor Susan Smith, responsible for ALICE, said: “It is fantastic news that, through ALICE, we now have an improved technology that could lead to significant advances in the treatment of cancer. With ALICE we have an opportunity to look at cancer cells in a way that has not been done before. It is particularly exciting that these experiments are now pointing towards an accurate diagnostic test that could change the lives of thousands of patients and we look forward to continuing to work with Professor Weightman as he takes this invaluable research to the next level.”

ALICE, at STFC’s Daresbury Laboratory in Cheshire, is an R&D prototype for the next generation of particle accelerators and is the first of its kind in Europe. It is based upon a new mode of operation, known as energy recovery, where the energy used to create its high energy beam is captured and re-used after each circuit of the accelerator, so less power is required making it cheaper to run. Electrons are sent round the accelerator at 99.99% of the speed of light and 99.9% of the power at the final accelerator stage is recovered and re-used.

The collaborative research between the University of Liverpool and STFC’s Accelerator Science and Technology Centre (ASTeC) is supported by the Cockcroft Institute and also includes the National Research Council of Rome Tor Vergata (ISM), the Department of Gastroenterology at Royal Liverpool and Broadgreen University Hospitals NHS Trust, and the Departments of Molecular and Clinical Cancer Medicine and Gastroenterology in the Institute of Translational Medicine at the University of Liverpool.

Listen to Professor Weightman’s interview on the Today programme (8 February 2012).