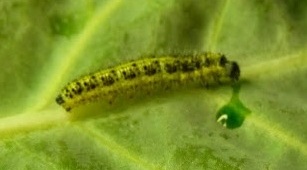 Caterpillar vomit repels predators - but at a cost

A type of caterpillar which defends itself by regurgitating on its predators is less likely to do so when in groups than when alone, a new study by researchers from the University of Liverpool and the University of Bristol has found.

Such reluctance is sufficient to cancel out the benefits of being in a group.

The study, published in Ecology Letters, will help in the design of more sustainable methods for reducing crop losses caused by caterpillars and similar pests.

Animals have some unusual ways to defend themselves against enemies.  While many rely on nasty stings and dangerous venoms, the caterpillars of the large white butterfly (Pieris brassicae) protect themselves by vomiting on their predators.

These caterpillars, like many other species that have anti-predator defences, live in groups so that they have safety in numbers.  However, many studies have shown that the size of a group does not affect the chance of survival in several different species.

Caterpillars of this species have reason to use their defensive regurgitation weapon sparingly since the loss of food through vomiting slows down growth, reduces survival and even reduces female reproduction by lowering the number of eggs.

This new study shows that there is a social side to defensive vomiting.  The researchers found that whether a caterpillar is willing to regurgitate – and to what extent – depends on the size of its social group.

Dr Mike Speed, from the University’s Institute of Integrative Biology, said: “Caterpillars take account of their group size when ‘deciding’ whether to vomit because they are trying to avoid the cost of vomiting.  In a group, it is quite likely that the predator will taste other individuals as well, each of whom might vomit and cause the predator to give up and leave.  Also, caterpillars compete with each other for food, and so the bigger the group the more important it is to not vomit.”

Dr Andrew Higginson, from Bristol’s School of Biological Sciences, said: “Because defensive regurgitation is so costly, each individual does better if one of its siblings is the one to vomit to deter the predator.  Therefore, some individuals appear willing to risk being ‘cheats’, not investing in the costly defence, and exploiting the likelihood that other individuals will defend instead.  Crucially we found that the number of non-vomiting individuals increased as their risk decreased with group size – a result of safety in numbers.”

Using a mathematical model, the researchers show that this reduced tendency to vomit can easily explain why the size of a group does not affect the chance of survival.