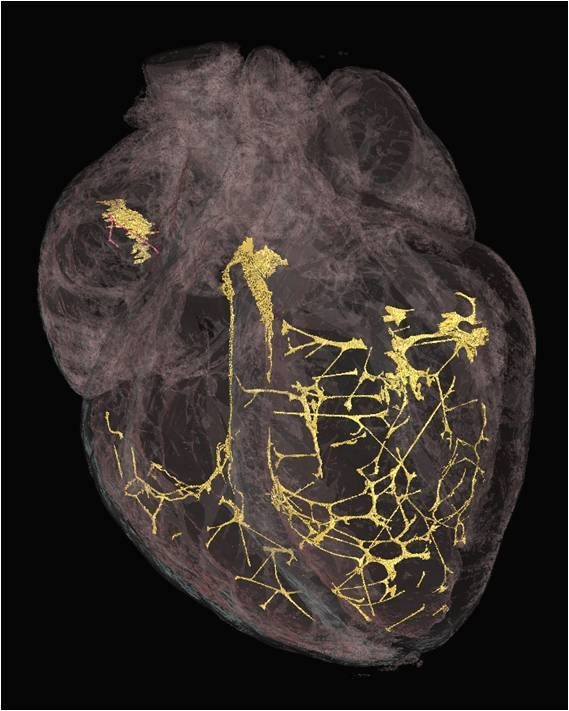 A 3D image of the heart, showing the fibres that control heart rhythm

Scientists at the University have developed a new X-ray technique to identify tissue fibres in the heart that ensure the muscle beats in a regular rhythm.

The new 3D images could further understanding of how the body’s heartbeat can be disturbed, which may help medics develop ways to reduce the risk of fibrillation – a condition in which heart muscle contracts chaotically and fails to pump blood rhythmically around the body.

The heart needs to pump blood in a regular rhythm to maintain a steady circulation of blood to all parts of the body.  It does this through the coordinated action of the muscle tissue, that pumps the blood, and the conducting tissue, which is necessary to distribute an electrical wave to trigger every heartbeat.  Until now scientists have been unable to produce high resolution 3D images of the conducting tissue to fully identify the network that controls heart rhythm.

The team at Liverpool used a micro CT scanner to image hearts that had been treated with iodine to highlight the different parts of the tissue.  They found that the solution was absorbed less significantly by the conducting parts of the heart compared to the muscular parts of the organ, allowing scientists to clearly identify the areas that produce electrical activity on the resulting 3D image.

Dr Jonathan Jarvis, from the University’s Institute of Ageing and Chronic Disease, said: “These new anatomically-detailed images could improve the accuracy of future computer models of the heart and help us understand how normal and abnormal heart rhythms are generated.  3D imaging will give us a more thorough knowledge of the cardiac conduction system, and the way it changes in heart disease.

“Computer models based on these high-fidelity images will help us to understand why the heart rhythm is vulnerable to changes in heart size, blood supply, or scarring after a heart attack.  One of the major concerns for surgeons in repairing malformed hearts, for example, is to avoid damage to the tissue that distributes electrical waves.  If they had access to 3D images of the conducting tissues in malformed hearts, however, it could be possible to understand where the conducting tissue is likely to be before they operate.”

The research, in collaboration with Alder Hey Children’s Hospital and the University of Manchester, is published in PLoS ONE.

10 thoughts on “Rhythm of heart revealed by 3D X-ray”