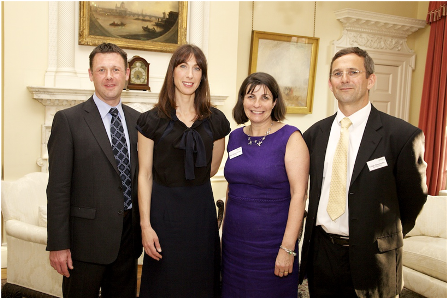 Dr Graeme Sills, lecturer in the Department of Molecular and Clinical Pharmacology, in the Institute of Translational Medicine, recently delivered a rousing speech to invited guests at an Epilepsy Research UK reception hosted by Mrs Samantha Cameron at 10 Downing Street.

Dr Sills was appointed as Chair of Trustees of Epilepsy Research UK in September 2011, having previously served as Chair of the organisation’s Scientific Advisory Committee for three years. Epilepsy Research UK is the only national charity that exclusively funds independent research into the causes, treatment and prevention of epilepsy, a brain disorder that affects over 450,000 people in the UK and is directly responsible for over 1000 deaths per annum.

The reception, which took place during National Epilepsy Week (20-26 May 2012), was organised to coincide with the 20th anniversary of Epilepsy Research UK and to recognise the charity’s achievement of awarding over £1 million in grant funding in a single year for the first time. Dr Sills spoke to a 120-strong audience of Epilepsy Research UK supporters, prominent members of the epilepsy research community, and representatives of funding councils, the pharmaceutical industry, and professional organisations allied to epilepsy and other neurological disorders.

He praised his predecessors at Epilepsy Research UK and resolved to continue their hard work in developing the charity and raising its profile. He acknowledged the efforts of the staff at Epilepsy Research UK and gave particular thanks to supporters of Epilepsy Research UK for their continuing commitment and selfless contributions to the charity, despite the adversities they and their families have faced as a result of epilepsy. Finally, Dr Sills challenged the epilepsy research community and research funders to do more to tackle epilepsy, to work together in partnerships to improve the lives of people affected by this often stigmatising condition, and to push for greater research support for epilepsy, which remains chronically under-funded in comparison to other, less prevalent brain disorders.