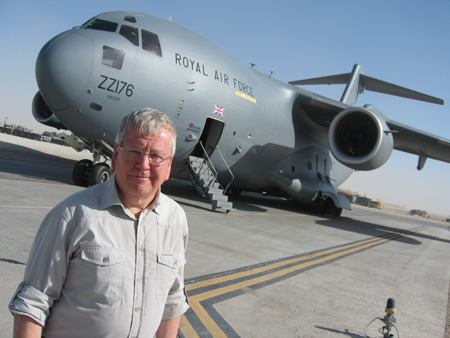 BAFTA award-winning Science Editor for ITN, Lawrence McGinty, and Founder of the Anthony Walker Foundation, Gee Walker, are among six esteemed figures to receive honorary degrees from the University of Liverpool.

ITN Science Editor and University of Liverpool Zoology graduate, Lawrence McGinty, wrote for the New Scientist for 10 years and in 1978 was awarded the Queen’s Silver Jubilee Medal for services to science journalism.  When Channel 4 was launched in 1982, Lawrence was appointed as its first science correspondent and was later awarded a Science Writers’ Fellowship of the Association of British Science Writers and picked up two British Academy of Film and Television Arts Award. During his career he has flown – and landed – a Harrier jump jet, swum with a Beluga whale in the Black Sea, and reported on a number of high-profile stories including the Challenger, Zeebrugge and Chernobyl disasters.

Gee Walker is founder of the Anthony Walker Foundation, a charity she established following the death of her son Anthony in a racially motivated attack in Liverpool in 2005.  The mission of the Foundation is to promote racial harmony and equality through education, sport and arts events and to support law enforcement agencies to reduce hate crime and build safer communities. Gee works across the UK speaking to groups about her forgiveness of her son’s killers and advocating the need for all children to be educated and supported so they can realise their potential and become active citizens in strong and diverse communities.

Sir Michael Bibby is Managing Director of Bibby Line Group Limited, a business-to-business services group involved in areas such as ship owning and operation, shallow water accommodation and offshore oil and gas services.  After graduating from the University of Oxford in 1984, Michael joined Coopers & Lybrand in London, where he later qualified as a Chartered Accountant.  He then spent several years at Unilever as a project accountant, before taking up the position of Finance Director of Bibby Line Limited in 1992. In January 2000 he was appointed Managing Director of Bibby Line Group Limited. Michael is a Director of the Chamber of Shipping, Director of Mersey Maritime and Typhoon Holdings, and he is also Chairman of the Fundraising Committee of the Prince’s Trust in Merseyside.

Chair of Knowsley Primary Care Trust, Rosemary Hawley, has worked in community and health organisations throughout her career.  She took a Voluntary Service Overseas posting in Ghana, and has held a position in the Bermondsey Community Health Council and as a board member of Guy’s Hospital.  She joined the Board of the Merseyside Regional Health Authority and later the board of the Liverpool School of Tropical Medicine.  She was one of the first recipients of the Duncan Society’s Duncan Medal, which is awarded to individuals who have made an outstanding contribution to the public health and wellbeing of the community. She has served as High Sheriff of Merseyside and was awarded an MBE for services to healthcare in Merseyside in 2007.

Professor Sir Ian Gilmore is an honorary consultant physician at the Royal Liverpool University Hospital and holds an honorary chair at the University.  He has particular interests in health issues related to alcohol misuse and the role of regulation, and chairs the UK Alcohol Health Alliance and European Alcohol and Health Forum Science Group.  Sir Ian is president of the British Society of Gastroenterology and chairman of Liverpool Health Partners, a partnership between the University and the teaching hospitals in Liverpool which promotes an Academic Health Science System in order to foster academic innovation, education and service development in the region. He is also Deputy Lieutenant of Merseyside.

The honorary degrees will be conferred during a week of ceremonies at the Liverpool Philharmonic Hall from Monday, 16 July, in which more than 4,000 students will graduate.