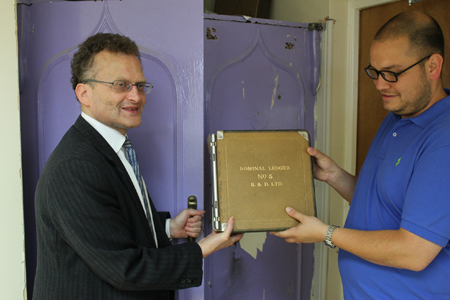 Business documents discovered in the former Rushworths building in Whitechapel have been donated to the University of Liverpool’s research project into the business.

The documents, which include old ledgers and business records from the late 1950s to the mid 1980s, were discovered in a safe on the top floor of the building when Liverpool solicitors, E. Rex Makin & Co, relocated. They have been donated to the University’s School of Music which is conducting a three-year research project to record the history of Liverpool’s long established and largest music business.

Rushworths was founded in 1828 by William Rushworth as an organ building business before quickly branching out into selling musical instruments.  It became one of the largest organ builders in the UK and made organs for many churches, cathedrals and halls in Liverpool, the UK and overseas.  In 1960 the retail business moved from Islington to Whitechapel and became the `largest music house in Europe’ comprising five sales floors of musical instruments, televisions, record players and household appliances as well as sheet music and records.

”This is a wonderful discovery”
Rushworths has a strong association with Liverpool’s long and rich music tradition, in particular with the Merseybeat scene of the early 1960s and the Beatles. Paul McCartney’s first guitar was said to have been bought from Rushworths and in 1962 James Rushworth presented John Lennon and George Harrison with their Gibson J-160E guitars specially imported from Chicago.

Jonathan Rushworth, who is supporting the research project, said: “This is a wonderful discovery for the project. These documents are incredibly useful and will help to form a picture of how the company was performing especially at a time in the 70s and 80s when Liverpool’s economy was in a downturn.”

E. Rex Makin & Co. Solicitors and Advocates, founded in 1949 by its eponymous and still practising Senior Partner, a graduate of the University, moved to the premises at the start of 2012.   Robin Makin, Managing Partner at E. Rex Makin & Co and also a graduate of the University’s Law School, said:  “When we moved into the premises we had a wall removed behind which was a huge safe that could not be opened.  It was clear that attempts had been made in the past to open the safe by cutting the hinges and the lock but to no avail.

”The research has made great strides”

“We therefore commissioned an expert safe cracker who opened the safe and in there we discovered a large number of records relating to Rushworths.  From discussions with members of the Rushworth family who visited the premises for ‘old time’s sake’ when we were converting the premises, I knew about the research project that was being undertaken.  It was a great pleasure to pass over such important source material to the project.”

Nicholas Wong, who is leading the research, said: “The research has made great strides during the last year and this has been helped by the fantastic support and contributions of the Liverpool public. Rushworths was a unique family-run business which over its long history touched and influenced many people.

“The project has been supported by several generous donations of resources and materials, such as that made by Robin Makin. I am interested in obtaining further evidence to support my research and urge anyone who has any business documents, letters, recollections or association with the Rushworth business, to get in touch.”

Anybody who wishes to get involved in the project should email rushw@liv.ac.uk

One thought on “Rushworths documents donated to University”