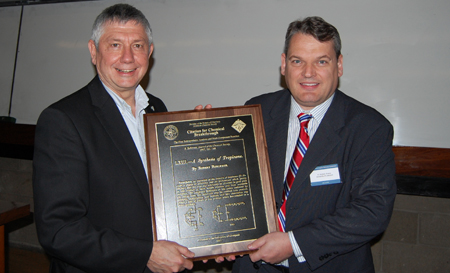 Executive Pro-Vice-Chancellor Stephen Holloway and Professor Andrew Evans accept the award on behalf of the Department of Chemistry.

The Department of Chemistry has been honoured by the American Chemical Society for the scientific breakthrough made by Sir Robert Robinson at the University of Liverpool nearly a century ago.

The award is in recognition of Sir Robert Robinson’s paper entitled, ‘A Synthesis of Tropinone’, which was published in the Journal of the Chemical Society in 1917.  The work represented the first example of a rationally designed synthesis, which was inspired by a wartime shortage of atropine and the belief that it could be prepared industrially by total synthesis.

The American Chemical Society honors publications, patents and books that have made breakthroughs in chemistry and the molecular sciences that have been revolutionary in concept, broad in scope, and long-term in impact.

Professor Andrew Evans, who presented the award on behalf of the ACS, where he is a Fellow, said: “This is a fantastic honour for the University of Liverpool.  This award recognises outstanding achievements in the world of chemistry and Liverpool now joins an elite group of organisations who have been honoured in this way.  The prestigious plaque will hang in the Department of Chemistry, in the building named after sir Robert Robinson, to inspire staff and students.”

Only one other university in the UK has received such an award from the American Chemical Society.