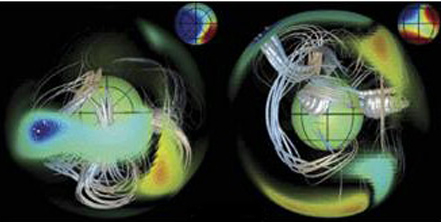 Scientists at the University of Liverpool have discovered that variations in the long-term reversal rate of the Earth’s magnetic field may be caused by changes in heat flow from the Earth’s core into the base of the overlying mantle.

The Earth is made up of a solid inner core, surrounded by a liquid outer core, in turn covered by a thicker or more viscous mantle, and ultimately by the solid crust beneath our feet. The magnetic field is generated by the motions of the liquid iron alloy in the outer core, approximately 3,000 km beneath the Earth’s crust. These motions occur because the core is losing heat to the overlying solid mantle that extends up to the crust on which we live.

The mantle itself is also in motion but at much slower speeds of millimetres per year as opposed to millimetres per second in the core. This mantle motion is responsible for the drifting of the continents at the surface as well as earthquakes, volcanoes, and changes in the climate over millions of years.

Map of the Earth’s core-mantle boundary showing how the amount of heat flowing out of the core is estimated to have changed over the last 290 million years. Large red areas are dense “thermochemical piles” (one under Africa, one under the Pacific) that remain at the base of the mantle and have already got very hot (and so take little heat from the core). Blue/violet patches appear below downwelling cold crust which draw lots of heat from the core. The map is centred on zero longitude

At intervals of hundreds of thousands of years, the North and South magnetic poles reverse and scientists can tell from rock formations precisely at what periods in the past this took place. The most recent reversal happened 780,000 years ago. Magnetic field variations happen on timescales of months to millions of years. Much of the magnetic field’s variation is thought to be sporadic but new research, led by Liverpool scientists, has found that over long timescales, this variability may be related to the changing pattern of heat loss across the core-mantle boundary occurring over millions of years.

The team performed a detailed synthesis based on latest findings from a number of different areas including the ancient geomagnetic field and its record in rocks, motions in the mantle caused by motions of the continents and the process responsible for generating the magnetic field in the core.

Dr Andrew Biggin, from the University’s School of Environmental Sciences, said: “The magnetic field has undergone big changes in its behaviour that might be due to the mantle’s controlling influence on the core. In particular, we focused on the time interval between around 200 and 80 million years ago – when dinosaurs were still around – when the magnetic field initially started reversing its polarity very frequently. During this period the polarity was reversing up to 10 times every million years; however 50 million years later, it stopped reversing altogether for nearly 40 million years.

“When these changes in the magnetic field were taking place, the whole of the Earth’s crust and mantle, including all of the continents, were undergoing a big rotation with respect to the geographic and time-averaged geomagnetic poles – the points defining the Earth’s axis of rotation. We suspect that this process, called True Polar Wander and caused by the changing density distribution in the mantle, will have changed the pattern of heat flowing out of the core in such a manner as to cause the magnetic field to first become less stable, with lots of reversals, and then become much more stable – and stop reversing.”

The team believes this may not be the only explanation and conjecture that this big drop in the frequency of reversals may also be related to a similar decrease in the number of ‘large igneous provinces’ (LIPs) or concentrated outpourings of magma from the Earth’s core, 50 million years later. The last LIP happened around 16 million years ago and produced the Columbia Plateau in the North West US. LIPs are thought to be produced by hot plumes of material rising from thermal instabilities near the bottom boundary of the mantle. 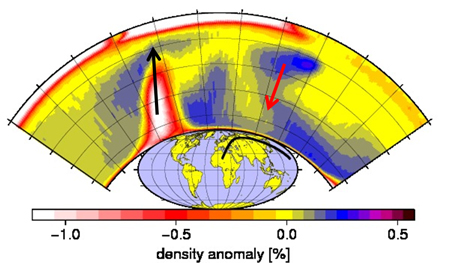 A cross-section through the Earth’s mantle from the geodynamic model used in this study to estimate heat flowing out of the core. Dense, subducted oceanic crust (blue) are sinking from the top while hot buoyant plumes (red/white) are rising from the base.

The team believes the 50 million year time lag between the magnetic field changing and the occurrence of the LIPs could represent the time it takes for the plumes to travel 2,890 km through the mantle. If this link were correct it would mean that the rather unstable magnetic field observed in the last 50 million years predicts that a considerable number of LIPs will erupt over the next 50 million years. This in turn could have major implications for the surface conditions – for climate and for life itself.