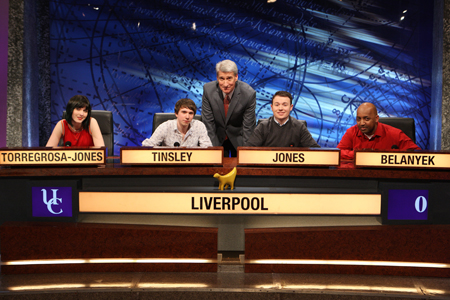 The University of Liverpool team, with quizmaster, Jeremy Paxman

The University of Liverpool’s attempt to take one of the most hotly contested crowns in academia – University Challenge – begins tonight.

The team, made up of captain, Andy Jones, alongside Sacha Torregrosa-Jones, Agneau Belanyek and Jonathan Tinsley, goes head to head with Bath University in the first round of the competition, having already completed a gruelling qualification that sees 128 entrants whittled down to a final 28.

Dentistry student, Andy jumped at the chance to be involved and other than being “the best looking team in the field” rates science as its area of prowess. He said: “I’ve watched it on TV for many years, and always enjoyed the challenge of it. It’s definitely the best quiz show, and has a nerdy but timeless sort of cool about it.”

“In the end though, it comes down to who you’re up against, and what questions you get”

Sacha Torregrosa-Jones, currently in the third year of a Physics BSc, said: “It takes a lot of practice to feel ready, and then, for it only to come down to one or two days of filming- it’s tough. We all practised together, so we know how hard we all tried. In the end though, it comes down to who you’re up against, and what questions you get. We’re pretty well rounded as a group. We split up topics according to what we were already good at, and got most major bases covered. We did decide that opera wasn’t worth studying, though, as none of us had any prior knowledge.”

As well as trying to cover the most obscure academic subjects in preparation, the team had to ready themselves for quizmaster, Jeremy Paxman’s no-nonsense style.

Andy said: “Jeremy is exactly as he appears on Newsnight – arrogant, abrasive, but utterly brilliant. When he came over for the customary pre-match photo his words, without the hint of a smile, were, ‘Hmmm, right. Well look at that camera and try to look like you are intelligent’. Classic.”

Sacha was equally effusive, adding: “The man is a professional. The same has to be said for Roger Tilling, who reads out the names of the contestants. I know my name’s a mouthful, but he had it in one. The whole operation is slick, and as for Paxman- he didn’t disappoint.”