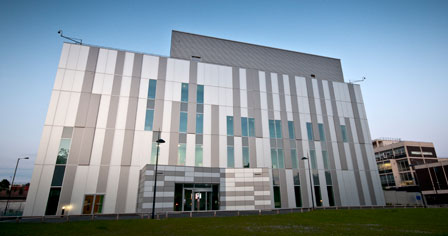 The grandson of Sir Ronald Ross, the 1902 Nobel Prize Winner, will open the University of Liverpool’s new £23 million research facility for the Institute of Infection and Global Health.

Sir Ronald Ross, a University of Liverpool scientist, was awarded the Nobel Prize for discovering that malaria is spread by mosquitoes. Now more than 100 years after this breakthrough, his grandson, David Ross, Chief of Clan Ross, and Director of the Wellcome Trust, Sir Mark Walport, will open the facility, where more than 200 scientists work in state-of-the-art laboratories on the study of infectious diseases and other global health problems.

Home to the University’s Institute of Infection and Global Health, the Ronald Ross building is the first phase in a total £70 million investment in facilities for the Institute. The building contains core technologies such as genomics, proteomics, and imaging, as well as enhanced facilities for Containment Level Three viruses to allow for the study of diseases, such as tuberculosis, HIV, and West Nile Virus.

David Ross of Ross said: “It is wonderful to see my grandfather’s legacy recognised in this way. I am delighted that Liverpool maintains its focus on tropical diseases and continues to invest in this important area 100 years after my grandfather carried out his research here. The establishment of the Institute of Infection and Global Health and the opening of this new facility will ensure that Liverpool remains at the forefront of research into infectious diseases.”

Research at the Institute includes collaboration with the Indian Institute of Science (IISC) and the National Institute of Mental Health and Neuroscience in Bangalore, to support the vaccination of more than 50 million people against a zoonotic brain infection, Japanese encephalitis, which affects thousands of children across Asia every year.

Sir Mark Walport, Director of the Wellcome Trust, said: “The Institute of Infection and Global Health consolidates Liverpool’s 100 year reputation for excellence in tackling some of the world’s most challenging diseases, and this new building is a fitting tribute to the Nobel Prize winning work of Sir Ronald Ross.”

Research at the Institute also includes a £5 million project focused on control mechanisms to reduce Campylobacter infection in farmed broiler chickens. The team is working with major UK food retailers to reduce bacterial infections in chickens and decrease incidences of food poisoning in humans.

Vice-Chancellor, Professor Sir Howard Newby, said: “This £23 million development is an excellent example of the University’s commitment to helping solve some of the most pressing global health problems. Its state-of-the-art laboratory spaces are home to scientists at the forefront of research into pneumococcus, diarrhoeal disease, and emerging infections, bringing together the brightest minds from medicine, biomedicine, veterinary health, and biological sciences.”

In the past two years the Institute has appointed 12 senior staff members, including seven professors in areas such as Hepatitis C, sepsis, and research on the impact of climate change on health.

The Ronald Ross building will be opened at 11.45am, on Tuesday, 9 October. Members of the media are welcome at the event. Please contact Samantha Martin on 0151 794 2248 if you plan to attend.