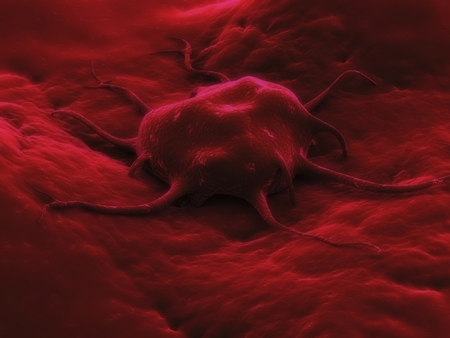 A cancer cell. Cancer of the stomach is the second most common cause of death due to malignant disease worldwide

Scientists at the University of Liverpool have found that the production of a protein that prevents the growth and spread of cancerous cells is impaired in patients with gastric cancer.

Cancer of the stomach is the second most common cause of death due to malignant disease worldwide.  New research findings at Liverpool, however, could contribute to the development of future gastric cancer therapies by restoring the functions of a protein called, TGFÎ²ig-h3.

The protein is released by cells called myofibroblasts, which form part of the supporting tissue around cancer cells.  The environment of myofibroblasts, blood vessels and other cell types, allows cancer to survive and can become as high as 70-90% of the total tumour mass.

Myofibroblasts are highly mobile cells that produce and release multiple substances that change cancer behaviour by altering their environment, leading to the growth and spread of cancerous cells.  Scientists at Liverpool have now discovered that in tumours of advanced gastric cancer patients, the myofibroblasts decrease the release of a protein that would normally inhibit the growth and spread of the disease.

Professor Andrea Varro, from the University’s Institute of Translational Medicine, explains “This protein normally acts as an anchor to link cells to proteins in the cancer cell environment restricting cancerous cells to the vicinity in which they have grown.  This allows targeting of treatments to the area, but in advanced stages of the disease the effects of this protein are diminished, increasing the risk of the disease spreading to other parts of the body.

“We hope that this work will help develop future treatments that are based on restoring the functions of this protein, contributing to the long-term recovery of patients with this often fatal disease.”

The research is funded by North West Cancer Research (NWCR) and the National Institutes of Health (USA).  It is published in Carcinogenesis.