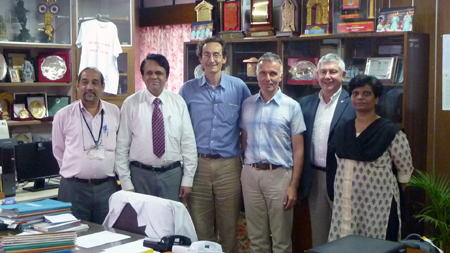 “Trained scientists, say theoretical physicists, are commonly no different to other people in their awe of a professional diagnosis dispensed by a medical doctor. Imagine my surprise then, when I was sitting in the office of Dr. P. Satish Chandra, the director of the National Institute of Mental Health and Neuroscience (NIMHANS ) in Bangalore and heard him discussing with colleagues what the possible origin of a rare brain condition in a female patient in the neurological ward could be.

In my unprofessional opinion, there should be an easy way to tell if a medical condition is due to tuberculosis or not. Not so, said the doctors. Diagnosis in medicine always follows a sort of fuzzy logic: you go through all the possibilities, but in the end you can never be absolutely certain of your judgement. I’ll keep that in mind, I thought, the next time I have to undergo treatment in a hospital.

I was on a fact finding mission in India to explore possible common projects with scientists at Bangalore, Hyderabad, and Delhi. My role was mainly to present the Stephenson Institute and Physical Sciences.

The visit at NIMHANS was a profound experience of how different sciences, via their analytical methods and the associated shift in paradigms, are growing slowly together. The case in point is MRI (Magnetic Resonance Imaging). It is something I teach my students in Physics.

“Dr. Satish Chandra wants reach a point where everything, from instrumentation to scientific and clinical knowhow, actually can be developed by Indian companies, doctors, and scientists”

This is exciting, if one sees an MRI image of a human brain for the first time: all light grey and dark grey shades, associated shadows telling you, where the bones are. Neuroscientists use MRI to detect abnormalities in the brain. In a neurological ward MRI scans show them how specific conditions are caused by changes in the brain. The game seemed to me rather simple: grey (light or dark) in MRI images is good, white is bad.

At lunch I met the director of the institute, one of the most interesting scientists I have ever met. NIMHANS is already the largest neuroscience centre in Asia, but Dr. Satish Chandra wants to reach a point where everything, from instrumentation to scientific and clinical knowhow, actually can be developed by Indian companies, doctors, and scientists.

During lunch we started discussing how MRI data are evaluated. In my work as condensed matter theorist I have a very similar problem: I have to visualize a large amount of three dimensional data in such a way, that the physical functionality becomes evident. I mostly use the density of electron charge and the position of atomic nuclei to this effect. Colleagues, confronted with such images, usually see with one glance the physical meaning of a system or situation.

Neuroscientists, when they look at MRI images, do exactly the same. However, it seemed to me that they had missed a trick: three dimensional data can not only be looked at for a quantity – in MRI it is the concentration of certain molecules – but also for time-development of these data, or for differentials. It seemed to me that expanding data analysis in these directions would introduce new dimensions into the analysis, which could then be used to compare for example the consequences of different treatments.  But I had underestimated what neuroscientists can actually do today.

For the next hours I looked at images of changes of a brain, when it is affected by various mental conditions like depression or schizophrenia. Schizophrenia is, I learned, a condition mostly due to infections of a child in the womb, and is mostly characterized by a high level of brain activity in cognitive problems without the ability to coherently process the data of the senses. A motor on high revs, where the tyres slide on ice, would be my day-to-day analogy.

After looking at all these examples of cutting-edge neurological research, a visit to a brain bank and the brain museum (slices of brain in alcohol and encased in glass), I left NIMHANS, profoundly impressed. The next step is to negotiate an agreement about dual PhD programs between the University of Liverpool and NIMHANS, which will start in 2013.”