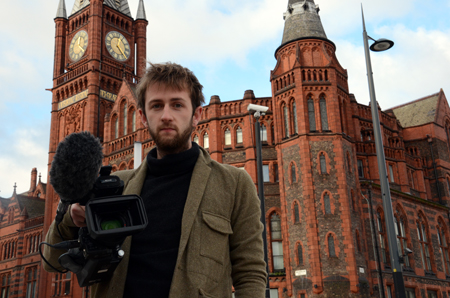 Joseph Malone: “Rather than just go and stay out there, I wanted to try and make something”

A University of Liverpool medical student’s documentary examining the aftermath of the 1984 Bhopal disaster will be shown at FACT’s Liverpool Film Night, following success at international film festivals.

Joseph Malone, 23 shot the footage alongside fellow student Charlotte Hardman, while out in India on his medical elective in 2010.

Now in his fifth year, Joseph said: “Rather than just go and stay out there, I wanted to try and make something. I hadn’t made a film before so it was a learning process.

“The situation in Bhopal has still not been sorted out and we could see how it hasn’t been resolved – we were surprised it was an ongoing disaster.”

The city of Bhopal, in India’s Madhya Pradesh region, fell victim to the largest ever chemical disaster on December 3 1984. A huge chemical leak at the nearby Union Carbide factory released a 30 foot gas cloud into the atmosphere resulting in the death of around 16,000 people and injury to a further 558,000 people, with ailments continuing to be found amongst the population today.

“This problem shouldn’t be forgotten. We want to encourage further help and highlight what is going on”

Joseph, who is originally from Lymm, said: “This problem shouldn’t be forgotten. The UK is one of the biggest funders of the relief effort in Bhopal. We want to encourage further help and highlight what is going on.”

The film is called, Sambhavna – or compassion – after the Sambhavna clinic, which was set up in the wake of the disaster by volunteers to offer good quality medical care to the region’s many victims.

It features interviews with doctors, researchers and volunteers, as well as those attending to receive treatment, alongside striking images of the now crumbling industrial site and surrounding homes and families.

It has also been chosen for a viewing at FACT’s Liverpool Film Night, an event designed to showcase the best film-producing talent in the region.

Joseph is now working on his next documentary about a Liverpool-based choir of recovering addicts, and hopes to combine his work as a doctor with his passion for film-making.

He added: “I’d like to carry on doing both things. I will have a secure degree, which is important, and by having this degree I am more able to gain people’s trust as a film-maker.”