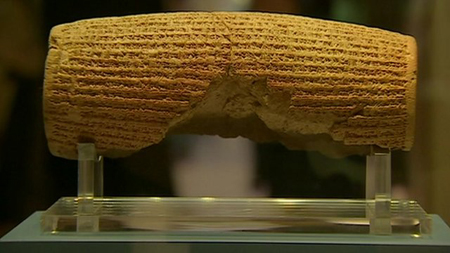 “One of the British Museum’s most famous artefacts, the 6th c. BC Cyrus Cylinder is going on tour.

The Cyrus Cylinder, the account of how the founder of the ancient Persian empire conquered Babylon, paid a high-profile diplomatic visit to Tehran in 2010, where it was greeted rapturously by President Ahmadinejad.  Now it is heading across the Atlantic, stopping off at Washington, Houston and San Francisco, on its way to the Getty Villa in Los Angeles.

Why is such attention being paid to a small clay cylinder no larger than a medium-sized handbag?

The message the cylinder conveys

The answer lies in the message that the Cylinder conveys.  After conquering Babylon (in 539 BC) with the support of the Babylonian god Marduk, the Cylinder describes how Cyrus restored Babylonian cults, and returned exiled peoples to their homes – and so seems to confirm Cyrus’ positive presentation in the Old Testament, where he is credited with returning exiled Jews to Jerusalem.

The message of the Cyrus Cylinder, then, is one of ‘respect for diversity and universal human rights’ (in the words of one of the touring exhibition’s sponsors).

This view of the Cyrus Cylinder is a long-standing one.  A copy of the Cylinder is even on display at the UN Headquarters in New York.  And amongst those who have hailed the Cylinder as the ‘first declaration of human rights’, we can list David Ben-Gurion, the last Shah of Iran, the Iranian Nobel Peace Laureate Shirin Ebadi, and George W. Bush.

“The Cylinder was never a declaration of human rights at all.  It belongs to one distinct local context, that of Babylon; its language and style are Babylonian.  The Jews are never mentioned”

Each of these, of course, has had his or her own reasons for appealing to Cyrus for support. And it is no different for the British Museum. As they acknowledge, the message of the Cylinder is a particularly timely one now, as a reminder of a period when relations between Jews and Iranians were rosier.

And yet the Cylinder was never a declaration of human rights at all.  It belongs to one distinct local context, that of Babylon; its language and style are Babylonian.  The Jews are never mentioned.  What it reveals above all is the Persian King’s pragmatism, his ability to impersonate different local elites.

This is all old hat.  And those in the know at the British Museum know all this too.  The BM director, Neil MacGregor, has hinted in one interview at the complexity of the original context, ‘a reminder of the intricacy of Middle-Eastern politics’. And though their press release quotes others’ grand claims for the Cylinder, they cannot quite bring themselves to say the same words themselves.

‘In a way’, the travelling exhibition’s curator admits, ‘it doesn’t matter so much what the document actually says, so much as what people think it says.’

It would be naive, of course, to expect the British Museum to undercut the cultural value of its own treasures.  If the Cylinder can, in its own small way, bring understanding between peoples, who can say that is a bad thing?

And the curator has a point: the value attached to the Cyrus Cylinder over the generations since its excavation in 1879 is at least as important as its original context.  And yet the interest and value of the Cylinder might in fact be enhanced if we told other stories alongside this one.

The story of how a canny ruler cemented his conquests with well-judged propaganda.  Or of how generations of modern rulers, activists and even museums have misrepresented Cyrus for their own ends.”

Read more
Bringing the ancient to life in Liverpool’s schools