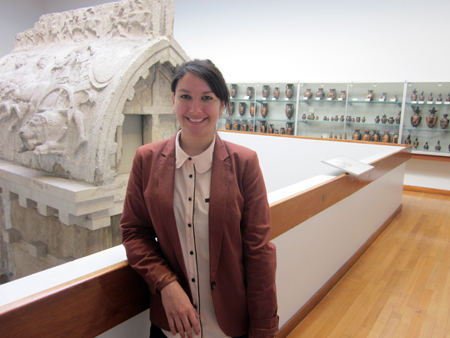 Jennifer Martinez Morales: “Investigating these modern and ancient comparisons will hopefully tell us more about the social environment in which people behave and act”

Little is known of the fate of women living in times of conflict and war in ancient times, particularly how women understood and responded to their surroundings during and after periods of unrest.

Jennifer, a PhD student studying Classics and Ancient History, is using literary texts and artefacts to piece together the fleeting references to women as victims of warfare to provide new insights into their world.

Jennifer said: “It is a fascinating area to study because so little is known about the lives of these women.  We have plenty of historical detail that tells us of the experience of men in war, but not how women were affected.  In literature we get brief lines about women being enslaved after a town is taken by soldiers, or women being sexual assaulted, but we never find out what happened to them or how they felt about the situation they were in.

“There was no word for ‘rape’ at that time, for example, but some terms of violence clearly indicate that women experienced these horrific acts during wartime”

“For the past year I have concentrated on what ancient literary texts can tell us and dissecting the language to understand what terms were used for extreme violence.  There was no word for ‘rape’ at that time, for example, but some terms of violence clearly indicate that women experienced these horrific acts during wartime.

“After the battle of Gaugamela in 331 BC for example, Alexander the Great sacked Persepolis, where his army engaged in total plunder and are said to have ‘dragged off women, clothes and all’.  The particular use of the verb in ancient Greek has to be examined along with the context.  It is only then that we get a better understanding of what actually happened to these women.

“What makes it difficult, however, is that we cannot assume accounts of extreme violence in war means that women were exposed to sexual violence.  If we compare the ancient world to modern documentation of some of the most reportedly violent military groups in the world today, extreme acts does not necessarily transfer to sexual abuse in encounters with women.

“In some groups there appears to be a moral line that cannot be crossed, even with soldiers that have the most physically violent records.  The strict internal organisation of these groups prevents their own members engaging in this type of violence against women.  Investigating these modern and ancient comparisons will hopefully tell us more about the social environment in which people behave and act.”

Jennifer is from Puerto Rico and graduated from the University of Puerto Rico in Anthropology in 2010.  She studied a Master’s degree in Archaeology at Liverpool, before starting her PhD in Classics and Ancient History with supervisors Dr Fiona Hobden and Professor Tom Harrison in the School of Histories, Languages and Cultures.