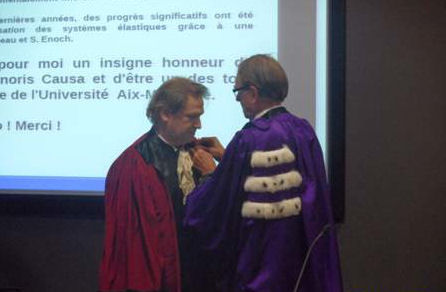 Professor Movchan being presented with his award

Professor Alexander Movchan from the Department of Mathematical Sciences has been awarded an honorary degree from the University of Aix-Marseille (AMU) in France.

The ceremony follows a decree signed by the former French president Nicolas Sarkozy earlier this year which allows the AMU to distinguish five Doctors Honoris Causa in 2012, one of whom is a recent Nobel prizewinner in Chemistry.

In the introductory speech, Professor Frederic Zolla from the Fresnel Institute, CNRS/AMU, spoke about the crucial work of Professor Movchan on the development of modern tools of asymptotic analysis of fields in multistructures with former colleagues Professor Kozlov and Professor Mazy’a.

He stressed Professor Movchan’s leadership in topics ranging from mathematical analysis, to continuum mechanics, to electromagnetics and engineering sciences, and highlighted his impressive publication record.

Professor Movchan’s contribution to the development of new research-led teaching techniques and his outreach activities with schools in France and England, led under the umbrella of the British Council, EPSRC and the French Ministry of Foreign Affairs, was also noted.

The University of Liverpool has enjoyed a long-standing collaboration with the Fresnel Institute (CNRS/AMU), which was initiated by Professor Movchan. Applied Mathematicians are collaborating on research into metamaterials and invisibility cloaks.

Professor Movchan was one of three distinguished Professors to receive the award from AMU along with Professor Eugene Koonin from National Institute of Health in Bethesda, USA and Professor Claude Rawson from Yale University. 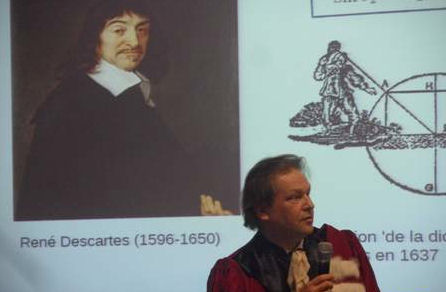 Professor Movchan at the ceremony