Frank Cottrell Boyce, the acclaimed writer behind the London 2012 Olympic Games Opening Ceremony, will be honoured by the University of Liverpool, alongside Rodney Holmes, who led the £1 billion Liverpool ONE regeneration programme.

Frank Cottrell-Boyce is a screenwriter, author and playwright who was responsible for the script behind director Danny Boyle’s opening ceremony for the London 2012 Olympic Games.

Born in Liverpool, he went on to  write for TV programmes, such as Coronation Street and Brookside before moving into films with such titles as Welcome to Sarajevo,  24 Hour Party People and the Oscar-nominated Hilary and Jackie.  His film Millions was directed by Danny Boyle and the story became his first novel, which won the Carnegie medal for Children’s literature.  His latest novel Unforgotten Coat, created for The Reader Organisation, has won The Guardian Fiction Prize. 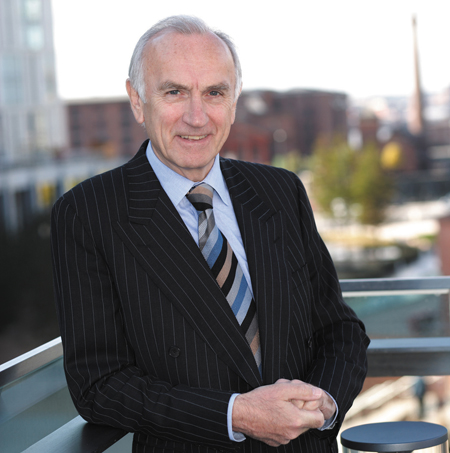 Rodney Holmes was instrumental in the emergence of Liverpool ONE

As Retail Projects Director of Grosvenor, Rodney Holmes was responsible for the £1 billion Liverpool ONE regeneration project, which has won numerous national and international awards – including being shortlisted for the 2009 RIBA Stirling Prize – since it opened during Liverpool’s European Capital of Culture year in 2008.

After retiring from Grosvenor, he chaired the economic development agency, The Mersey Partnership, where he oversaw its merger into the Liverpool City Region Local Enterprise Partnership (LEP).  He is a member of the LEP Advisory Council, a Trustee of the Playhouse and Everyman Theatres Trust, and a member of the Project Management Board for the proposed Mersey Gateway Bridge.

The honorary degrees will be conferred at the Philharmonic Hall on the 12 and 13 December.