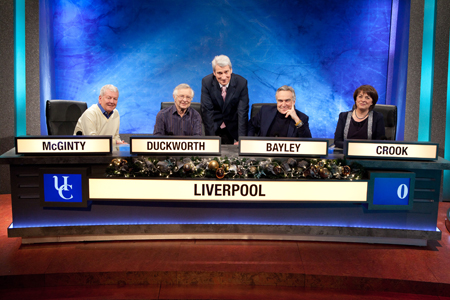 UNIVERSITY of Liverpool alumni will do battle in a special Christmas series of long-standing BBC2 show, University Challenge.

The team, made up of familiar faces such as ITV News’ Laurence McGinty, must defeat Cardiff University in the first round, next Thursday December 20, to progress.

Host, Jeremy Paxman will be chairing the contest as part of a series that features the likes of Diane Abbott MP, Loyd Grossman and Jay Rayner taking to the famous set to represent their alma mata.

The University’s team sees Laurence McGinty joined by Dr Frank Duckworth MBE, who graduated with a BSc Hons in Physics 1961, before securing his PhD in 1965.

Frank went on to develop the Duckworth Lewis method of scoring in Twenty20 cricket, and was awarded an MBE for services to the sport, and the Royal Statistical Society, in 2010.

Frances Cook OBE, who graduated with a BA Hons in Medieval and Modern History in 1976, will also be testing her grey matter.

Frances is Chief Executive of the Howard League of Penal Reform, the oldest penal reform charity in the UK. She was awarded an OBE for services to youth justice.

Taking the final spot is British design and cultural critic, journalist and best-selling author, Stephen Bayley, who studied for his Masters at the University’s School of Architecture in 1975.

Alongside Terence Conran, Stephen created The Boilerhouse Project, Britain’s first permanent exhibition of design, in the Victoria and Albert Museum. The space went on to evolve into the influential Design Museum.

Competing for the crown

The University’s first round match against Cardiff takes place on Thursday December 20, ahead of the all-female Newham College , Oxford and University of Nottingham on Friday, with each successful team going on to compete for the crown in the following week, leading up to Christmas.