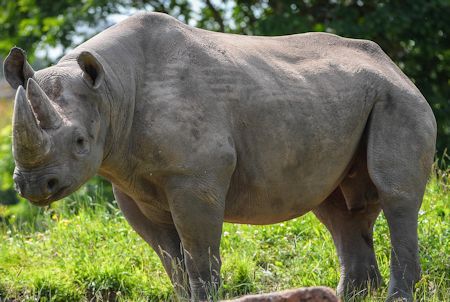 The first comprehensive study of captive black rhino reproduction in Europe highlights how hormone analysis could improve the success of breeding programmes.

Researchers from the Universities of Liverpool and Manchester, in partnership with Chester Zoo, carried out a six-year study that encompassed 90% of the European population of black rhino.

Dr Katie Edwards, who led the research as part of her PhD at the University of Liverpool’s Institute of Integrative Biology, said: “Although some black rhinoceros breed well in captivity, not all do, which reduces the vital genetic reserve that these populations represent.

“This species is of high conservation importance, so understanding what could be limiting breeding in certain individuals and how we could make improvements is a priority.”

Dr Edwards added: “Our analyses showed that females who had never bred were more likely to exhibit irregular oestrous cycles, indicating that underlying physiology is involved in differences in breeding success.

“As well as non-breeding females not cycling as reliably, behavioural observations showed us that these females don’t necessarily show when they are ready to mate, which can make managing breeding difficult.

“Hormone analysis helps address this problem by allowing us to predict when a female will be sexually receptive to a male, even if she doesn’t make it obvious.”

Hormone analysis has been successfully used at Chester Zoo which has seen three births in the last three years.

“The idea is that with a better understanding of factors that affect reproduction, we know where we should be focusing our efforts to support the European-wide breeding programme.”

As well as looking at hormone analysis, the researchers also investigated a number of other factors that could affect breeding success.

Females that had never bred were found to be heavier than those that had, demonstrating that maintaining a suitable diet in captivity can play an important role in the success of breeding programmes.

Non-breeding females were also found to be more unpredictable in their overall temperaments.

Dr Susanne Shultz, from the Faculty of Life Sciences at The University of Manchester and the academic supervisor for the project, said: “This research highlights how rhinos can behave in a different manner despite being kept in similar conditions.

“We think this demonstrates that it is important to recognise individual differences and adjust management plans accordingly to maximise the health and reproduction across all individuals in the population.”

Dr Sue Walker, Head of Applied Science at Chester Zoo, said: “Poaching in the wild is a serious threat to the rhino and it is therefore important for us to understand the factors that can influence reproductive success.

“We established the project to understand why some individuals breed well, while others do not. The idea is that with a better understanding of factors that affect reproduction, we know where we should be focusing our efforts to support the European-wide breeding programme for this critically endangered species.”

The results of the study are published in the Journal of General and Comparative Endocrinology.