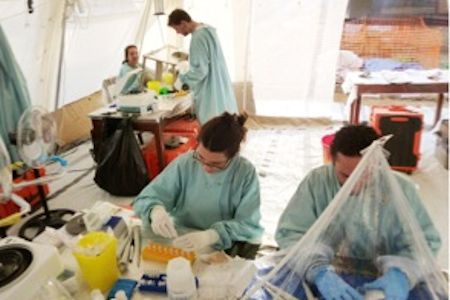 Researchers from the University of Liverpool, in collaboration with Public Health England, have investigated new ways to identify drugs that could be used to treat Ebola virus infection.

They looked at what proteins inside a cell are critical for the functions of Ebola virus and are hijacked by the virus to help with infection.  One of the proteins they have targeted is known as VP24. This protein disrupts signalling in infected human cells and disrupts the body’s immune system and the fight against the virus.

Once the team identified these cellular proteins they were able to find out whether any drugs were already in existence that could block the function of the particular protein.  One such drug identified was ouabain, which can be used in the treatment of heart disease.  Administering this drug reduced virus replication in treated cells.

The study was led by Professor Julian Hiscox from the University’s Institute of Infection and Global Health and Professor Roger Hewson at Public Health England.

Disrupting cellular proteins important for viruses also has the potential to tackle the problem of resistance to medication.
Professor Hiscox said: “This study shows how existing therapeutics can be identified and potentially repurposed for anti-viral therapy. The technique of using existing and tested drugs for a different purpose can save considerable time and ultimately, lives.”

Disrupting cellular proteins important for viruses also has the potential to tackle the problem of resistance to medication.  Since the cellular proteins are effectively evolutionarily static, the virus won’t be able to adapt to defeat it – as is increasingly the case with treatment by anti-virals used against viral proteins such as seen with influenza virus and HIV infection.

The study, which also involved Dr. David Matthews from the University of Bristol, used the unique specialist facilities at PHE Porton, which are designed to safely work with viruses such as Ebola under conditions of high containment.

Co-author Professor Miles Carroll, Head of Research at PHE Porton, said: “This research highlights the anti-viral effects of an already available and licensed human drug which might prove beneficial in a therapeutic setting.”

Professor Hiscox concluded: “The philosophy of transiently targeting the function of host cell proteins that are critical for virus infection holds great promise not only for increasing the potential arsenal of drugs against Ebola but other viruses as well.”

The paper ‘Elucidation of the Ebola virus VP24 cellular interactome and disruption of virus biology through targeted inhibition of host cell protein function’, was a collaboration between the University of Liverpool, Public Health England, the University of Bristol and the Health Protection Research Unit in Emerging and Zoonotic Infections.  It is published in the Journal of Proteome Research.

The full paper is available here.