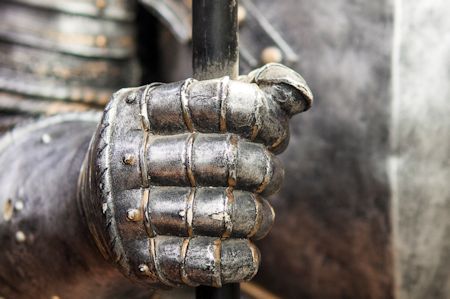 As part of this scheme, Dr Peverley delivered a free thinking essay about the way people viewed their rulers during the Wars of the Roses.

“The TV series Game of Thrones, based on George R. R. Martin’s Song of Fire and Ice novels has taken the world by storm. Following the political intrigues and battles of several noble families wrestling for control of the kingdom of Westeros, the series takes inspiration from a real civil war for the English throne known as The Wars of the Roses (1455-87).

Just as Martin reshapes history to create new worlds for his twenty-first-century audience, so people living through the medieval conflict used the stories of the past to discuss the nature of power and promote peace among their contemporaries.

Take John Hardyng for example, a veteran of Agincourt, who completed a unique account of British history in 1457 for King Henry VI. Written in response to the weak governance and aristocratic factionalism that triggered the medieval wars, Hardyng’s Chronicle tells the story of Britain’s monarchs, real and mythical, in the hope that the historic examples of good kingship would inspire Henry to reassert his authority and restore peace.

The text shows sensitivity to the unique circumstances that led to the late fifteenth-century power struggle. Henry VI had been just nine months old when he inherited the monarchy, so a council made up of family members and other nobles, similar to the small council set up to advise Joffrey Baratheon in Game of Thrones, governed for him until he was able to rule independently.

Unfortunately, the length of the king’s minority meant that some of his relatives grew rather too accustomed to the power that came from managing his sovereignty and, like Tyrion and Cersei Lannister in Martin’s fantasy, found themselves vying for control of the young monarch.

The end of conciliar rule

Henry too grew so dependent on others that when conciliar rule ended he frequently failed to assert his own will and was easily manipulated. This led to factionalism between those who had the king’s favour and those who didn’t, and the situation exacerbated in the 1450s when Henry VI suffered a mental breakdown and was unfit to rule.

While the king was incapacitated, Richard, duke of York, father of Edward IV and Richard III, held things together as Chief Councillor and Protector of the Realm, but the new arrangements for administering royal power only served to undermine the king’s authority in the longer term. York’s protectorship alienated Henry’s queen, Margaret of Anjou, who gave birth to Henry’s heir, Prince Edward, in October 1453 and sought to act as regent while her husband was compromised.

When the king recovered, Queen Margaret and others continued to mitigate his inadequacies by redefining sovereign power as a tripartite entity encompassing king, queen and prince, but nothing could alter the fact that true power lay solely in the person of the king as God’s anointed sovereign. The king’s ineffectual leadership continued to damage to the stability of the realm.

We cannot know how Henry VI reacted to Hardyng’s Chronicle and its call for the effective distribution of royal power and punishment of those maintaining civil unrest, but the timing of the book’s presentation is crucial to our understanding of how topical it was and how it might have represented popular opinion.

“Every kingdom divided amongst itself shall be made desolate”

According to John Whethamstede, Abbot of St Albans, the king was inspired to seek peace between his magnates after reading several books of advice and Scripture. The theme of his address to the lords when the council assembled once again was based on the gospels’ warning that “Every kingdom divided amongst itself shall be made desolate.” In his speech Henry aligned his own desire for order with that of God, citing examples of historic and recent kingdoms ruined through civil division. Afterwards he obtained a peaceful accord between his lords and led a ‘Love Day’ procession around London as a public affirmation of his sovereign power.

Sadly, Henry’s action was too little too late. York made a move for the throne the next year claiming the monarchy as a descendent of Edward III. As Henry’s son was disinherited and the succession settled on York, Hardyng began rewriting history again for the king-in-waiting. Though he now wrote for a strong leader, his narrative was essentially the same: there were lessons to be learnt from the past, and knowledge of how previous kings had protected or failed their kingdoms was power.

In this too, aspects of the real-life Game of Thrones parallel Martin’s series. Just before civil war breaks out in Westeros, Tyrion Lannister, is asked why he reads so much. He replies: ‘I have a realistic grasp of my own strengths and weaknesses. My mind is my weapon. My brother has his sword… and I have my mind… and a mind needs books as a sword needs a whetstone, if it is to keep its edge. That is why I read so much!  Tyrion, like Hardyng, understands that true power comes from a sharp mind using shrewd politics to control the men with swords. Henry VI lost his throne because his mind was weak and his will was too easily controlled by others.”

You can listen to the complete broadcast of Dr Peverley’s essay for BBC Radio Three here:  http://www.bbc.co.uk/programmes/b03f8c54