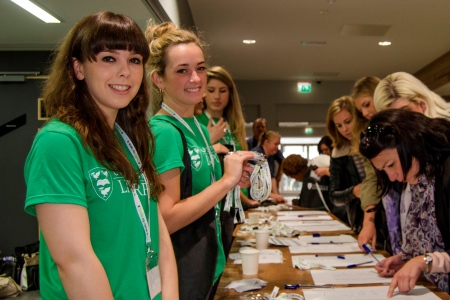 Student nurse, Danielle King was part of a team of students which organised the Reflecting on the Past, Shaping the Future conference on the University campus where over 400 students from across the North heard from leaders in the profession.

“In your final year of your nursing degree you have to contend with a dissertation, exams, practice placement, and the prospect of looking for a job to start when you finish. With all of this it seems silly to do anything more to add to the stress that you are already under. I, however, volunteered to organise the next student-led nursing conference, following on from the successful conferences organised by students from Liverpool John Moores University and Edge Hill University two years previously.

At the time of agreeing to do this it felt like such a great opportunity and something exciting to be part of.  It soon became clear though that it was not going to be an easy task to complete. I had so many ideas on who I wanted to speak at the conference, as there were certain areas I was interested in. I had no idea though that on its own this is not enough to organise a conference for over 400 people.

Initially a series of meetings were arranged involving third year students as well as inviting volunteers from the first and second year students. From this I learnt , that when in doubt, you should ask for help!

”If anyone has the opportunity to do something like this, grab it with both hands and throw yourself into it
From the initial meetings we formed a ‘conference organising committee’ and realised the importance of arranging regular meetings to discuss the conference.  We soon came to realise that there were many things we did not have a clue about, as none of us had any previous experience in this area. These forums worked to build for the event.  We contacted many different people in the University, from the Guild of Students to the Communications Team and were grateful that we could draw on the experience of lots of individuals; however it was evident that we had to shoulder the responsibility for coordinating and organising the event ourselves – with help!

We had a great support system behind us in the form of our head of nursing Julie Crane and lecturer Ian Pierce-Hayes who helped us in our journey to organising a conference.  Without them we would not have gained the confidence to get in contact with specific individuals, in particular Dr Jane Cummings, the Chief Nurse for England.

Initially, the discussions centred on the best date for the conference and location. We looked around the Echo Arena and Adelphi hotel, both of which were fabulous but really we were keen to utilise the University campus.  However we were concerned that due to the extensive refurbishment of the Guild, our choice of venue would be a building site until a few weeks before the day of the conference… At one point we had a guided tour of the site about six weeks before September wearing hard hats and boots trying to imagine what the venue would like as well as hoping it would be ready in time. Student organisers including Danielle King (2nd from the right) and speakers

In the final weeks leading up to the conference, with our guest speakers confirmed, it was only the little bits that seem so insignificant at the beginning that we had to do. The hours spent packing conference packs and creating signs, chasing people via email, and stressing that we wouldn’t get everything done, were all worth it when the day of the conference finally came.

As an individual that helped organise the conference I cannot say how the day went as a whole as I was running around dealing with computer faults and other minor dramas!

The feedback that we received made the whole experience so worthwhile. It ran smoothly and all the speakers we had organised were a great hit, not only with the students but registered nurses and guests as well.

If you asked me would I do it again, my answer would be yes, but maybe in a few months when I have recovered from this one. I would say if anyone has the opportunity to do something like this grab it with both hands and throw yourself into it. Even though it involves so much time and hard work, the skills you gain from it will last a lifetime.”

Find out more about courses in nursing on the University’s Study pages or visit the departmental website.