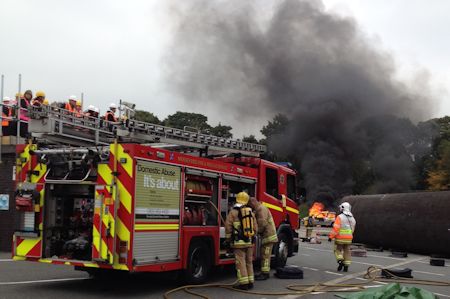 The University of Liverpool is evaluating the national emergency services’ response to a large-scale accident exercise held in the city.

The major operation involved 850 police officers, ambulance crew and fire fighters, as well as a number of government and military agencies, and 150 actors and other participants who played the role of casualties and family members.

A fire service training station was turned into a disaster area as part of the national Home Office funded JESIP (Joint Emergency Services Interoperability Programme) project, which aims to improve the way that emergency services work together during major incidents.

The scenario was played out at Merseyside Fire & Rescue Service’s Teaching Development Academy and St John Bosco’s College in Croxteth, and included a number of train carriages as well as other collapsed structures, to simulate realistic emergency environments.

In addition to the frontline emergency services, two hospitals and Liverpool City Council also took part, responding to simulated injuries, security issues and managing news and social media – all of which added to the complexity of the event.

To help the emergency services learn from the experience, psychologists from the University’s Critical & Major Incident Psychology (CAMI) research group have been involved throughout the planning and preparation stages of the event. This culminated in them coordinating a number of teams of observers during the live exercise, collecting information on emergency service response, coordination and cooperation.

He said: “This sort of exercise is essential if emergency services are to respond effectively to rare but large scale disasters. The work of our team is to conduct a complete evaluation based on psychological principles – everything from the command structure to how individual units communicate with one another.”

Another member of the CAMI research team, Dr Michael Humann, added: “The scenario constructed for this exercise seems very dramatic, but the closer we can come to reality in exercises, the better the response will be if something similar really happens. Taking a step back and carefully evaluating the actions of everyone involved will help individuals and the services as a whole perform better in a real crisis.”

In addition to both Psychology and Computer Science collaborating to collect data during the event, assistance was provided by the University’s medical students who, as part of their curriculum, played the role of members of the public caught up in the crash. As well as being there to take part and gain a first-hand perspective of the event, they also observed the work of the emergency services within a major incident, helping them to obtain a valuable insight into possible future situations they may encounter as doctors.

Dr Sara Waring from the CAMI research team said:: “The level of support provided by Psychology, Computer Science and Medicine demonstrates an ever-growing need for interdisciplinary research. This is essential for gaining a richer understanding of the complex dynamics that are present in high risk and uncertainty environments such as major incidents. It is also essential for identifying ways in which to assist emergency services with managing disasters.”

To date, JESIP is just one of the areas in which the CAMI research group has worked with emergency services. They have also assisted with a number of live exercises around Merseyside and the UK, and are part of the University’s new London campus expansion which is allowing them to co-ordinate efforts with a number of agencies in the capital.