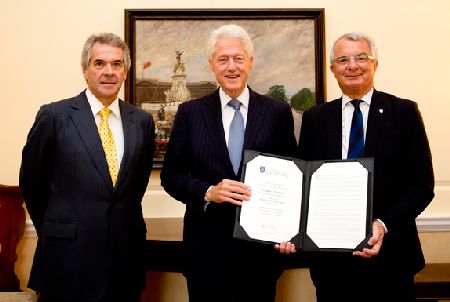 President Bill Clinton, Founder of the Clinton Foundation and 42nd President of the United States, has received an honorary degree from the University of Liverpool at a special ceremony held at the British Embassy in Washington DC.

President Clinton, who left office after eight years with the highest approval rating of any President since the Second World War, was honoured with a Doctor of Laws for his significant contributions to improving global health care and protecting the environment, as well as strengthening education and international economies.

Before becoming the 42nd President of the United States, President Clinton completed his bachelor’s degree at Georgetown University and was selected as a Rhodes Scholar to continue his studies at Oxford University.  He later completed a Law degree at Yale and returned home to Arkansas, where he served five terms as governor.

William Jefferson Clinton was the first Democratic president in six decades to be elected twice – first in 1992 and then in 1996. Under his leadership, the country enjoyed the strongest economy in a generation and the longest economic expansion in U.S. history, including the creation of more than 22 million jobs.

After leaving the White House, President Clinton established the Clinton Foundation with the mission to improve global health, strengthen economies, promote health and wellness, and protect the environment.

In addition to his Foundation work, President Clinton has served as the top United Nations envoy for the Indian Ocean tsunami recovery effort and as the UN Special Envoy to Haiti.

Vice-Chancellor, Professor Sir Howard Newby, said: “We are proud to honour one of the great leaders of our age, an inspirational man who has worked tirelessly in the support of research and education to improve the lives of people around the world.”

Leader of our time

In support of the Clinton Foundation, University of Liverpool researchers have established networks to address major infectious diseases in Africa, such as HIV and malaria.

The ceremony was hosted by the British Ambassador to the United States, Sir Peter Westmacott; he said: “It is a privilege to welcome President Clinton and the University of Liverpool, especially on such a momentous occasion.

“This honorary degree from a British university reflects the depth, breadth and longevity of the unique ties between the United States and the United Kingdom – links that have long been especially strong in higher education.”