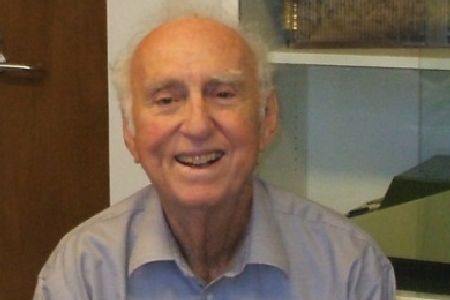 Martin Perl, a particle physicist of distinction whose research was based in large part at the Stanford Linear Accelerator Center SLAC in California, and who latterly was appointed as Visiting Professor in the Department of Physics, has died at the age of 87.

Perl was born in 1927 in New York City, son of refugees from Poland. He graduated from high school at the age of 16, and then served in the Merchant Marine before military service in World War II. On his return he earned an undergraduate degree in chemical engineering from the Polytechnic Institute of Brooklyn in 1948, and then he went on to work as a chemical engineer at General Electric.

At the age of 23 he decided to enrol in the physics PhD programme at Columbia University working with I. I. Rabi who had won the Nobel Prize in Physics in 1944. He then served on the faculty of the University of Michigan before joining SLAC in 1963, at a time when the lab’s iconic 2-mile-long linear accelerator was being constructed.

Perl was known as a scientist for his characteristic persistence and fortitude in his experiments. His work at SLAC was driven by his determination to understand the nature and properties of leptons, particles which alongside quarks were known at the time to be the fundamental constituents of matter. Martin was convinced that as well as there being an electron and heavier muon in Nature, that there should also be additional leptons, just as it was becoming apparent that new “generations” of quarks were being discovered at SLAC.

Jonathon Coleman, Royal Society Research Fellow at Liverpool, said: “Martin was inspirational, a colleague whose commitment and passion for physics were matched with a determination to achieve what others thought was impossible. He shared his ideas and thoughts with me at SLAC and he brought it all to work in Liverpool where our plans for the future will continue to be realised.”

His first experiments were unsuccessful, but with the advent of electron-positron collisions in the SPEAR collider, he was able to demonstrate after painstaking work that indeed there existed a third lepton family – the tau-lepton, with 3,500 times the mass of the electron.

Since he retired, Perl continued to work at SLAC. His recent work was to probe for evidence for “dark energy” in the Universe by means of laboratory experiments which pushed at the “precision frontier” to find deviations from expectation given present understanding of the laws of physics. Dark energy, as its name suggests, is right now no more than a construct of cosmologists and astrophysicists to fix up present astronomical observations which reveal the properties of what we nowadays understand as the expanding Universe.

Perl believed that if it existed, ultimately consequences of dark energy must show up terrestrially. To this end his engagement at SLAC in this respect during his retirement included enthusing young physicists to develop the experiments with sensitivities, hitherto considered almost impossible, to probe for the effects of dark energy.

One such was Jonathon Coleman, who, after leaving SLAC to take up a Royal Society Research Fellowship in Liverpool, continued to work with Perl setting up an atom interferometer in the Department of Physics with the aim of probing anomalous gravitational effects which could be due to dark energy.

Though still in its infancy, Coleman’s experimental work has developed fast in collaboration with Perl to the extent that he is now looking to the construction of a larger experiment which also may well run “in coincidence” with similar apparatus in the US.

Themis Bowcock, Head of Particle Physics at Liverpool, commented “In his short time with us in Liverpool, Martin brought unforgettable inspiration. One could not but be inspired by his passionate commitment and his determination to discover the unknown and the unexpected, and one could not but be impressed with the innovation and skill which, even in his ninth decade on the planet, he brought to his work. Everyone who met and interacted with him when he was in Liverpool can never forget their interaction with one of the great experimental physicists of recent times.”