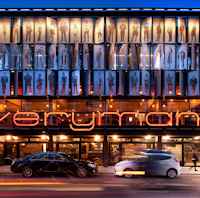 Emma Curtin is a registered architect and university teacher based at the University of Liverpool’s School of Architecture. She is co-ordinator of the first year BA design studio and teaches on the third year and MA courses

“The Everyman Theatre has won the Stirling Prize.  What quickly became the lunch venue of choice for  School of Architecture staff has won Britain’s most prestigious architecture award, named after Liverpool alumnus, Sir James Stirling.

It beat a marvellous field of iconic buildings including the Shard and the Olymic Swimming Pool.

It seemed naïve to think our local theatre could win, I am delighted that we were wrong.

Hope Street: home of the Everyman

For the last few weeks our first year students have been studying Hope Street; home of the Everyman. This is a unique and complex context; a historic street lined mainly with Georgian and Victorian buildings, then punctuated at either end by magnificent 20th century cathedrals.

Haworth Tompkins have dealt with this impossible context splendidly. In a manner similar to many of the nearby buildings from previous eras, the theatre has the capacity to be an unobtrusive backdrop to the city until you look up and pay attention to the detail of the façade, or get a glimpse of the bold natural ventilation chimneys.

These, incidentally, sit comfortably in the Liverpool roofscape, which is no stranger to big shapes and landmarks.

Inside, the sequence of social public spaces overlooking the street has a feeling of gentle robustness. The exposed concrete and natural timber finishes are reassuringly hardwearing but never hard.

Alongside gentleness there is a warmth to these spaces which might seem unlikely between exposed brick and concrete structure and a glass façade. Trying to deconstruct my impressions of the space, I decide that this is achieved through the choice of natural materials and considered finishes.

There is a conspicuous lack of the plastic-y construction products you often find in public buildings. The various timbers soften the concrete and the concrete has a certain patina created by the shuttering. This is all combined with careful acoustic attenuation and the brilliant use of colour in Antoni Malinowski deep red ceiling artworks alongside the timber tones and black fittings.

There is a serious attention to detail here. The furniture, the light fittings, and even the toilets are good. Like the rest of the building the theatre itself also feels great but I will wait until I have seen a production before I attempt to unpack that space too.

To top it off, this is not a guilty pleasure, with a BREEAM Excellent rating the building is officially sustainable. To put this in more meaningful terms, consider that 90% of the material from the demolished building was reused in the new building and that this building has one of the first naturally ventilated auditoriums in the country.

It is fantastic for Liverpool School of Architecture to have the building of the year around the corner. This is especially so, when it is a publically accessible building, which has won for all the right reasons. We will no doubt be using it as a teaching aid for many years to come.

Meanwhile, I hope that our profession and the people commissioning buildings will be studying how Haworth Tompkins and the Liverpool and Merseyside Theatre Trust came to achieve this sophisticated building. Understanding the quality of the physical design is not enough.

We must learn lessons about the collaborative process, and understand how it came to be procured through a traditional contract. Looking beneath the finishes to understand the inner workings of the project process is essential to be able to bring some of this quality into more of our public buildings. It will be worth it, but if you need convincing take a trip to the theatre.”