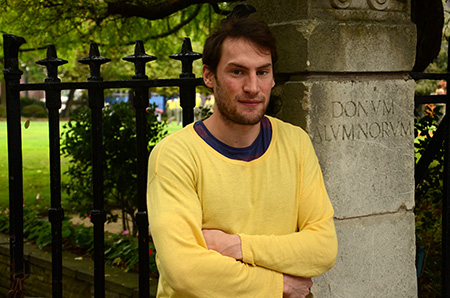 Jack Webb's project is supported by the AHRC

Jack Webb is in the third year of his AHRC funded PhD, examining representations of Haiti in Britain in the nineteenth century.

“Haiti presented a series of troublesome questions to Western observers as it abolished slavery, overthrew its colonial power, expelled the majority of its ‘white’ population and maintained its tenuous independence as the New World’s only state with a ‘black’ government.

Considering Britain’s ambitions in the nineteenth century of maintaining and expanding its Empire, Haiti necessarily presented an uneasy presence that suggested the possibility of the collapse of Imperial rule and the introversion of racial hierarchies. In particular, it highlighted the potential of Britain’s enslaved (and later, subject) population in the Caribbean for self-government.

British representations of Haiti were complicated by the anxieties that they freighted. Haiti was often depicted as ‘barbaric’ and devoid of order. As I have found in writing up my second chapter, such representations helped to justify the expansion of the British Empire as they were contrasted against notions of measured British rule.

What is particularly interesting, and makes this project especially important, is that Haiti has received relatively little attention from Western scholars. In part, this is due to Haiti’s unwelcomed independence that led to two centuries of problematic ‘silence’ in European and American historiographies.

Recent studies have tried to correct this and Haiti is now recognised as having one of the most complicated and important histories in the Atlantic World. Haitian studies is, then, a particularly fertile field of research that it is great to be a part of and I look forward to contributing to.

Over the past year I have met various Haitianists and scholars working on similar topics through participation in conferences and through my work as Seminar Convener for the University’s Centre for the Study of International Slavery (CSIS). The Centre is a joint initiative between the University and the International Slavery Museum that aims to research all aspects of slavery, from the history to modern day people trafficking.

Considering Liverpool’s slaving past, it is wholly appropriate that such a centre exists in the city. It organises regular seminars, conferences and one-day series and  I will be presenting a paper alongside Karen Salt, one of the field’s leading researchers.

In this talk I look at how Haiti was instrumentalized in parliamentary responses to the Morant Bay Rebellion (1865) as a warning against allowing the Jamaican ‘rebels’ further political rights.

Although Haiti was often cited in these debates, its definition was never opened up or discussed. To find out how Haiti was interpreted in the British Parliament, I look at the increasing practice of scientific discourse and its definitions of Haiti as a place that is quantifiably retrograde and simultaneously difficult to categorise.