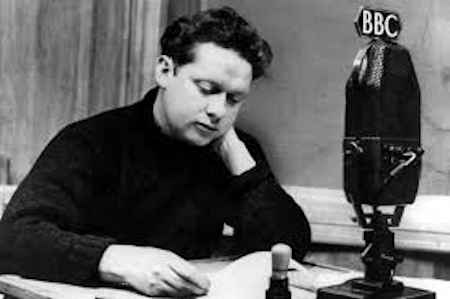 On the centenary of the birth of Dylan Thomas, Horatio Clare, author, journalist and Miriam Allott Creative Writing Fellow in the University’s Department of English, writes:

“Happy birthday, Mr Thomas, a century young today. Imagine the scenes in Brown’s Hotel if by some miracle you had lived! Carnage and catastrophe? I doubt it.

All that would have had to be many decades behind you. You would have needed to have started the 12 step programme on that last fatal trip to America and never touched another drop. Alcoholics Anonymous meetings with you would have been tremendous.

Queues around the block. I hope you are pleased by your enduring, even burgeoning fame. Your talent was sublime, a once in a century gift. Your lines and scenes and stories have a way of lodging and growing in any who hear them, rather like Shakespeare’s.

I thought of you only yesterday, again, gazing at our Celtic Sea. I always think of you in October and at Christmas – that wondrous scene when the aunt’s house catches fire and the hoses blast the parlour to wreckage which the aunt surveys before turning to the firemen and asking ‘Have you got anything good to read?’

Genius, and such a Welsh form of it; soaked in the wit, gossip, rhythms, dreams and idiosyncratic visions of our small country. You are well out of the 21st century in some ways. Our lust for celebrity and originality, for colour and scandal would have hounded you. You would have been wasted in tweeting.

I can’t see you teaching Creative Writing without incident. There’s the story of Caitlin writing a poem and revising it and revising it and sweating over it and finally showing it to you. Not bad, you said, But why don’t you work on it? We have to give more constructive feedback nowadays.

Better that we remember the spectacular love affair you had with our language and the world, and make sure that your poems are never forgotten – they are riches that defy time, and we can only stand and salute the dazzling mind that made them. Thank you, Mr Thomas, and happy birthday, and may you rest gentle in your good night.”

Horatio Clare is a member of the University of Liverpool’s Centre for New and International Writing.