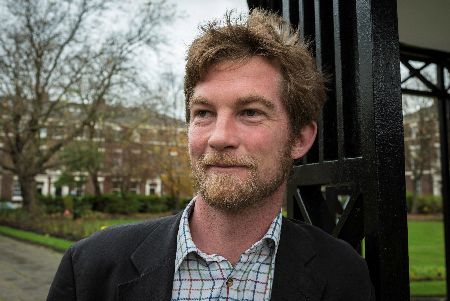 Author and journalist, Horatio Clare, is enjoying a new phase in his career, as he seeks to inspires University of Liverpool students in new ways of writing

Horatio Clare is enjoying a new phase in his writing and journalistic career; inspiring third year undergraduate students to think differently about expressing themselves in words is a challenge that he tackles with enthusiasm in his role as the University of Liverpool’s Miriam Allott Creative Writing Fellow.

Horatio studied English at York University, graduating in 1996, after which he trained as a tabloid journalist for Trinity Mirror in Newcastle, before joining the BBC as a researcher and producer on Radio 4’s Front Row and Radio 3’s Night Waves.

He is author of two memoirs, a novella, two travel books and two novels, all of which received favourable critical acclaim.   He is now teaching third year undergraduate students `creativity’ which will involve encouraging them ‘to think sideways’ when approaching writing.

“Encouraging students to question and evaluate their creative thought processes is an interesting challenge,” Horatio says; “next term this will involve taking them out of the classroom to absorb other forms of creativity from architecture, to listening to conversations in the street or outside the pub.”

As well as his impressive writing output, his career experience and connections mean that he can – and does – advise students on how to access the London-centric world of publishing and media, in particular, who to contact and how to contact them.

As well as his teaching commitments, Horatio has helped the students to publish their own magazine and introduced an `Essay surgery’ on a Wednesday afternoon which can be accessed by anyone across the campus.  Students attend the sessions for stylistic tips, grammar advice and help with written English for those who don’t speak it as a first language.

Horatio says: “It is a really exciting role; I am currently enjoying helping a group of students from the Department of English who want to get poetry into public places in the city and advising them on who they should contact to make this idea become a reality.”

Horatio is one of the organisers of the University’s Centre for New and International Writing, home to talks and readings by local and international poets and journalists.

“The Centre is a creative space for would-be writers to mix with writers who have been through the process of getting published and made a successful name for themselves,” he says.  “We are half way through the Centre’s Miriam Allott Visiting lecture series, which is hosting British poetry evenings and lectures from big name authors, such as Will Self.”

Horatio feels “blessed to teach creative writing” in a city he describes as “amazing”.  He loves the music scene, waterfront, the statues, the history, its maritime past and the connections with the port.  It is a fitting environment, he says, for his most recent book Down To The Sea In Ships – of Ageless Oceans and Modern Men, which describes two ocean voyages he made as the writer in residence on two container vessels.

Horatio currently has a children’s book in the pipeline, and an idea for a book about people who work at night which stems from Down To The Sea In Ships.

For more information about the Centre for New and International Writing please contact Horatio Clare.