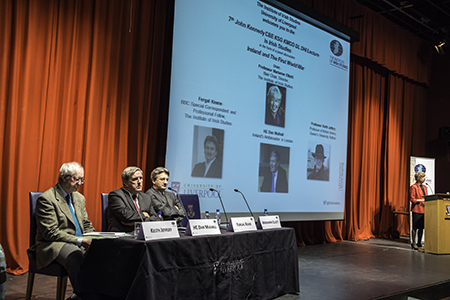 World War One should be seen as a ‘bond’ in British Irish relations, according to the panel presenting the John Kennedy Lecture in the University of Liverpool’s Institute of Irish Studies.

Broadcaster and writer, Fergal Keane; Irish Ambassador to London, Dan Mulhall and Queen’s University Belfast’s Professor Keith Jeffery spoke to a capacity audience of 260 about Ireland and WW1, as part of the Institute’s ongoing series of talks for the Decade of Commemorations.

The panel suggested that the Irishmen who signed up believed they were fighting for small nations, and as such Nationalists felt they were fighting as much for Ireland as for Britain. This explained why men continued to sign up, even after 1916.

But the panel said the confusion surrounding Irish motives and loyalties, and how to commemorate involvement, prevented many from acknowledging Irish sacrifice.

This was changing, Professor Jeffery said, and he pointed to the Gaelic Athletic Association (GAA) now recognising those members who fell during the war. The audience also gave personal accounts of their own mixed family traditions, often featuring both frontline soldiers and IRA.

Closing, the panel encouraged open commemoration of Irish involvement in WW1. Professor Jeffery suggested it should be seen as a ‘bond rather than an embarrassment’ in British Irish relations.

Now in its seventh year, the John Kennedy Lecture in Irish Studies is funded by and dedicated to Manchester-Mayo businessman, John Kennedy.