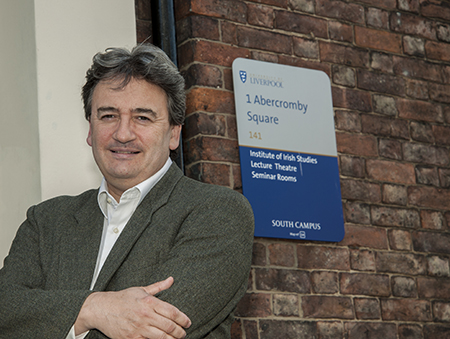 He’s covered conflicts from Ireland to Ukraine but journalist, Fergal Keane says the emotion he felt most keenly on taking up his position as Professorial Fellow at University of Liverpool was “fear”.

Now two years into the role, the BBC Foreign Correspondent is a highly valued member of staff well regarded by the students taught by him on the Institute of Irish Studies Understanding Conflict Masters programme.

Fergal said: “My expectation was fear. Fear that I would be unable to transfer enough of a kind of calmness in myself to deal with what is a very different way of working to the hurly-burly world of journalism.

“There was also a fear that I would not be able to pull myself back far enough to deliver the sort of perspective to students that I would like to.”

Fortunately, Fergal’s fears were unfounded and he has been able to combine the two roles seamlessly, even finding that each contributes to the success of the other. Coming from a family of teachers – Fergal’s grandfather taught at a County school in Ireland – and political activists, he certainly has the pedigree for the role.

Fergal said: “I want the students to look at the history of things. Whether you are dealing with conflicts in Ireland, South America or the Middle East, I always want them to read it in context. So that’s not what happened last year, but what happened 100 years ago in making these conflicts today; the knowledge of what created that.”

“I really need to know my stuff. It’s not like trying to do a three minute two way with a little bit of time to research. I have got to know the ground I am on because otherwise I will be found out very quickly”

Fergal’s life as a journalist began straight from school, before he joined the BBC as Northern Ireland correspondent in 1989. He has since received numerous awards including a BAFTA, the Orwell Prize for political writing, and an OBE for services to journalism. Honoured with a doctorate by the University in 2011, Fergal took up his teaching position in January 2013.

He says for him conflict is “a lived experience” and history is a “continuum”. This approach allows him to report simultaneously on events a century ago, and conflicts unfolding before his eyes; both largely fuelled by “fear of the other”, he says, or the fear that “if you don’t kill them first they will kill you”.

And he says transferring this knowledge to the classroom has been one of his greatest challenges.

Fergal said: “You cannot come in and bluff. The students will ask the most searching questions, probably because they have not yet been corralled into certain ways of working or thinking.

“I really need to know my stuff. It’s not like trying to do a three minute two way with a little bit of time to research. I have got to know the ground I am on because otherwise I will be found out very quickly.”

His advice to today’s students is to “always challenge your opinions with facts every day of your life”. Railing against the upsurge in prejudiced opinion encouraged by populism, the “endlessly reductive” mainstream press and social media, Fergal said: “You will only know what your opinions are worth if they are taken out of the box and subjected to the most severe tests. Facts, facts, facts.”

To find out more about the Institute of Irish Studies MA in Understanding Conflict, visit: http://www.liv.ac.uk/study/postgraduate/taught/understandig-conflict-ma/overview/