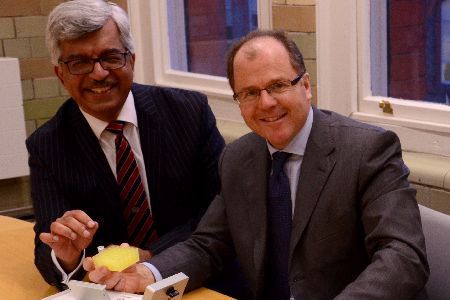 The North West is a ’powerhouse for life sciences’, Minister, George Freeman, said during his visit to the University of Liverpool.

The UK’s First Minister for Life Sciences was in the region to see the latest medical innovations in action.  He met with researchers at the University’s Wolfson Centre for Personalised Medicine, MRC Centre for Drug Safety Science, and the Centre for Genomic Research.

New figures have revealed that nationally the booming sector has attracted over £3.5 billion of investment and secured more than 11,000 jobs since the launch of the UK Strategy for Life Sciences in 2011.

The Minister witnessed first-hand how the region is leading the way for new innovations in life sciences, from the development of significant personalised medicines and latest technologies in genome analysis at the University, to tackling infectious diseases at the Liverpool School of Tropical Medicine.

The Minister said: “The North of England represents a real powerhouse of life sciences, driving forward growth for the country. With more than 1,000 businesses, supporting around 38,000 skilled jobs and being supported by our world leading universities, the region is contributing significantly to our growing economy.

“We want to be the best place in the world for life sciences and Liverpool is a fantastic example of how the region is attracting investment and developing new 21st century medicines.”

The visit to Liverpool comes following a major announcement in which the Government invested more than £230 million in a range of revolutionary technologies aimed at identifying the causes of diseases such as cancer and dementia.

As part of this scheme Professor Munir Pirmohamed, as Director of the MRC’s Centre for Drug Safety Science at the University, was awarded £5 million to develop new technologies in stratified medicines.

Professor Pirmohamed said: “We were pleased to welcome the minister to the University to discuss what Liverpool can achieve for patient care with the latest and most sensitive technologies.  By combining data with careful clinical observations of patients, we are beginning to tailor treatments to the individual so that they are not only effective but also safe, reducing the burden of adverse drug reactions on the NHS.”

It currently takes on average over a decade to develop a new drug and can cost £1 billion – from the early pre-clinical research right through to the final product. A fresh approach, made possible by ground-breaking developments in genomics and digital technology, could shave years from the development of new medicines, devices and diagnostics and will also stimulate new investment and jobs and create a stronger NHS.