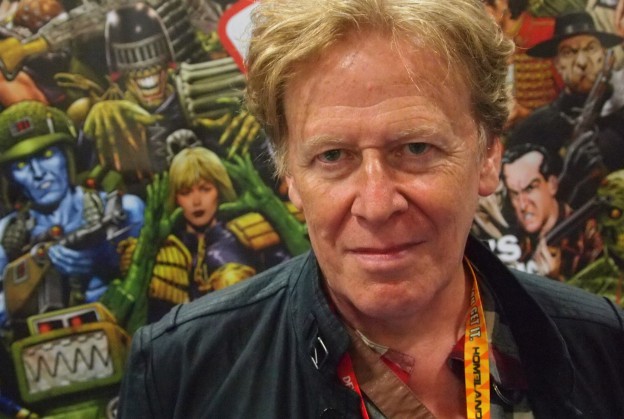 The writer behind Charley’s War, Pat Mills, will challenge current revisionist spin of a century of conflict at a University of Liverpool public lecture this month

The writer behind Charley’s War, the iconic early 80s comic strip that laid bare the horrors of World War One, will challenge the current revisionist “spin” of that century old conflict at a University of Liverpool talk this month.

Pat Mills, a Visiting Professor in the Department of English, created the story of Charley Bourne, the underage British soldier who joins up and heads to France aged 16, alongside artist Joe Colquhoun in 1979. The strip ran in the publication, Battle Picture Weekly until 1985, when readers left Charley disillusioned and on the dole, as Hitler rose to power in 1930s Germany.

Describing the series as a “career highlight”, Pat said: “The Great War has become a controversial subject because of the way it is represented in the media today as a noble sacrifice. The idea that anything was wrong about it has been thoroughly played down.

“What we never hear is that it was a calculated act of secret intelligence. You don’t have to have a PhD in history to recognise that the whole thing is so reminiscent of the way Tony Blair drew the country into war in Iraq. There was the same secret diplomacy, the same half-truths to the House of Commons.”

“It’s the Orwellian idea of whoever controls the past, controls the present and the future. I think there is a responsibility to challenge the revisionist spin because of all the soldiers who fell, many not as a noble sacrifice but as betrayal”

Charley’s War follows its protagonist to the Western Front, and his encounters with pompous officers, conscientious objectors, deserters; and loyal comrades. It doesn’t shy away from detailing the complex moral tangles all those involved faced, whether declining to be part of firing squads, or sacrificing personal safety for the benefit of others.

And today, Pat feels that complexity has been lost to a narrative seeking to present events as ‘good’ versus ‘bad’.

He said: “It’s the Orwellian idea of whoever controls the past, controls the present and the future. I think there is a responsibility to challenge the revisionist spin because of all the soldiers who fell, many not as a noble sacrifice but as betrayal.

“The assumption is that saying that somehow makes you unpatriotic, but I think it makes you more patriotic because it makes your heart go out to all those people needlessly slaughtered.”

But he says he can imagine Charley today being “quite accepting” of the propagated version because he created a character who “deliberately wasn’t me”. “Like most servicemen, I think he was able to believe everything he was told, even if much of it was a lie”, Pat said.

The character most like the author is Charley’s friend, Ginger, who dies fairly early on in the series after being struck by a shell during the Battle of the Somme. Pat said: “I thought, if he carries on he’s going to be overtaking Charley and this is the story of Joe Everyman.

“I think that is one of reasons it was so successful.”

This event forms part of the Security and Conflict public lecture series and is organised in collaboration with the School of the Arts.

The Famous War Comic: Charley’s War A Challenge to the Revisionist Spin on the Great War, with Pat Mills takes place on Wednesday, December 17 at 6pm in the University of Liverpool’s Sherrington Building. Tickets are free but must be booked.