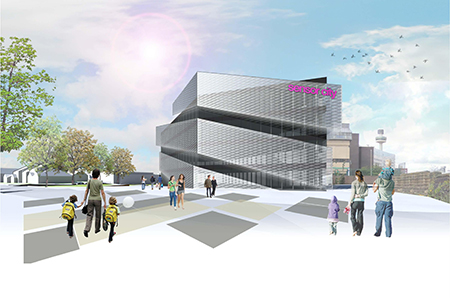 A new hi-tech business hub that could create 1,000 jobs and house 300 new businesses over the next decade has officially launched.

A collaboration between University of Liverpool and Liverpool John Moores University, Sensor City will see the creation of a sensor-systems business innovation centre in a bespoke 2,500m2 building in the Copperas Hill redevelopment zone

The Sensor City Industry Event, at Liverpool Science Park, provided an opportunity to learn more about a University Enterprise Zone (UEZ) seeking to become a major influence on the future of hi-tech business around sensor technologies.

University of Liverpool Executive Pro-Vice-Chancellor, Professor Steve Holloway, said: “It is a great achievement for the City Region to have been successful in winning the national competition to create the University Enterprise Zone: Sensor City.

“It is of the greatest regional importance that the entrepreneurial talent that is resident in the Universities, is given the opportunity to translate ideas from the back-of-the-envelope to start-ups, and eventually to fully fledged businesses which, in turn will benefit the region and potentially create new jobs.”

“Sensor City is a fantastic example of what can be achieved when universities and businesses collaborate, and stands testament to the extraordinary talent in Liverpool”

Universities, Science and Cities Minister, Greg Clark said: “Sensor City is a fantastic example of what can be achieved when universities and businesses collaborate, and stands testament to the extraordinary talent in Liverpool.

“This new facility will ensure that the innovation and entrepreneurial spirit of students and academics can be harnessed by industry. This is great news for Liverpool and great news for the rest of the UK.”

Professor Robin Leatherbarrow, PVC Scholarship, Research and Knowledge Transfer at Liverpool John Moores University said: ” We are delighted to have received such enthusiastic input today from businesses both large and small, the very companies who will directly benefit from Sensor City.

“It is the first major strategic collaboration between LJMU, the University of Liverpool and the Liverpool City Region Local Enterprise Partnership ,and as sensor technologies form a major part of the LCR LEP’s Innovation Plan (2014-2020), we hope to work with local companies to further support them to compete on a global stage.”

The market for sensor systems is estimated to be £310billion globally and is growing at over 10% per annum. The UK sensor industry is a £13bn/annum sector supporting 70,000 jobs and producing £6billion in exports. Around 1.4million people in the UK are employed in sensor-aligned professions of which 159,000 are in the North West and 27,000 are in the Liverpool City Region.