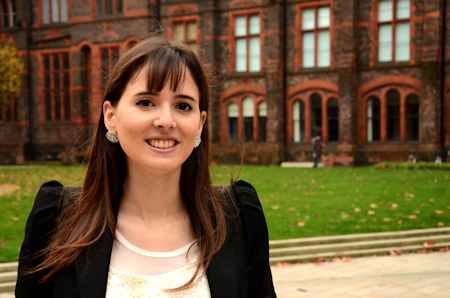 Sara Ronzi, a PhD student in the Department of Public Health and Policy, is exploring aspects of how to make cities better places to grow old in.

Funded by the National Institute for Health Research, her research is related to the School of Public Health Research’s ‘Age-friendly cities and towns’ project, and is supervised by Professor Nigel Bruce, Dr Dan Pope and Dr Lois Orton.

My interest in research started when I was in school, where I was always encouraged to explore and question everything I read, as suggested by Phaedrus: “Non semper ea sunt, quae videntur, decipit frons prima multos” (Things are not always what they seem: the first appearance deceives many people), which helped me to develop my critical approach to knowledge.

During my studies in Public Health, I have always been interested in the processes that support –or do not support – older people to stay healthy. This PhD represents the perfect opportunity to explore a topic which I am particularly keen on.

My project focuses on respect and social inclusion in age-friendly cities which are communities which create physical and social environments to support older people to age healthily.

It aims to identify a set of measures which can be used as a framework to assess if respect and social inclusion policies and initiatives benefit older people’s health.

This framework will be a useful tool for academics, policy makers and organisations who provide services for older people.

I am also interviewing policy makers and representatives from organisations in the city and older people to identify the main challenges in making Liverpool a better place to grow old in.

It is known that older people “are often among the last to be engaged when it comes to decision-making processes within their neighbourhoods” (Buffel et al., 2013 pg.25).

As part of my research to find out what older people think, I used an innovative and participatory method called ‘Photo-voice’, which asked older people from different areas of the city to take photographs to identify which aspects of Liverpool made them feel more or less valued and part of their community.

Elderly people in the most deprived areas are known to experience worse health, more social exclusion and a lack of access to services, in comparison with more affluent areas and we will see if this study will confirm this.

So far, the participants in `Photo Voice’ have been enthusiastic about the project and the use of visual images was perceived as an important tool to enable them to think critically about their community.

The photographs taken by the groups of older people in this project will form an exhibition (planned for May 2015) which will be available for the participants, researchers, policy makers and those organisations that work with older people to come and view.

If you would like more information about me and my PhD project you can contact me via: