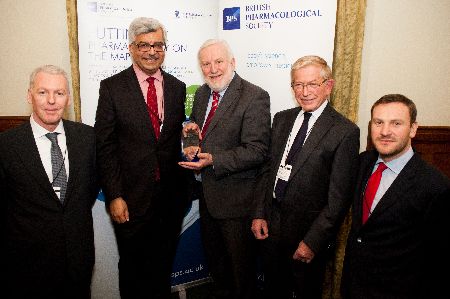 The British Pharmacological Society has recognised the University of Liverpool for its contributions to drug safety research and the training of the next generation of scientists.

The ‘Putting UK Pharmacology on the Map’ vote selects sites of special scientific interest linked to achievements in pharmacology based on a ballot of MPs, peers and senior members of the scientific community.

Led by Professor Munir Pirmohamed, the University’s Department of Molecular and Clinical Pharmacology was honoured for its research into drug metabolism and interactions and the discovery of the genetic risk factors for severe hypersensitivity drug reactions. They were also recognised for providing world-class training for the next generation of drug safety scientists, many of whom are already leaders in academia and industry.

Professor Humphrey Rang, President of the British Pharmacological Society, said: “These sites of special pharmacological interest have made outstanding contributions to the discovery and development of medicines, and undeniably also to the health and economy of the UK. By learning from our rich history, we can ensure that the UK remains at the cutting edge of research.”