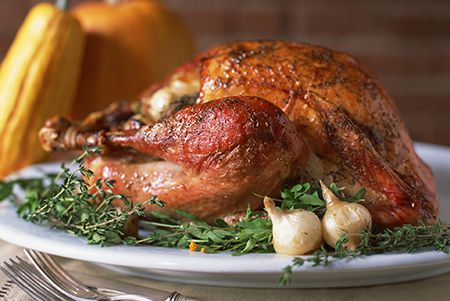 Washing the Christmas turkey could present a risk of food poisoning, according to research at the Universities of Liverpool and Manchester.

In a national survey carried out as part of the research, nearly 50% of people said they always or usually put their festive bird under the tap before cooking it.

But Food Safety advice from microbiologists and the Food Standards Agency (FSA) warns against this as it risks spraying pathogens, such as Salmonella and Campylobacter, over clean plates and cutlery, causing cross contamination which can lead to food poisoning.

Turkey under the tap

Almost 900 people took part in the national online survey, which is part of wider work on food and disease economics being carried out by researchers at the Universities of Liverpool and Manchester. It found that 48.6% of respondents always or usually washed their turkey under the tap. Only 41% said they never washed the festive poultry.

Professor Sarah O’Brien, from the University of Liverpool’s Institute of Infection and Global Health, said: “In our ‘Enigma’ programme we are trying to find out why Campylobacter rates remain stubbornly high. This research shows that, despite good, published advice on how to stay safe from food poisoning, the message is still not getting through.”

“In our ‘Enigma’ programme we are trying to find out why Campylobacter rates remain stubbornly high. This research shows that, despite good, published advice on how to stay safe from food poisoning, the message is still not getting through

Professor Dan Rigby, a lecturer in environmental economics from the University of Manchester, said: “Washing poultry is often said to be something that older people were brought up doing, but the survey showed that it is 18 to 34-year-olds who are most likely to wash their turkey this Christmas. We also found that men were more likely to wash the turkey than women.

“People are underestimating the level of contamination. Despite years of information campaigns against washing poultry the habit seems hard to kick for many and the findings of our survey suggest this is not just a generational habit that will fade away.

“Christmas is one of the most pressured days for home cooks to deliver a great meal but people are still not getting the food hygiene message around turkeys – the centrepiece of the meal. The message is simple, wash your hands, not the turkey.”

Most common cause of food poisoning

According to the survey, 57% of men reported always or usually washing the family’s Christmas turkey, compared to 44% of women.

The survey found similar behaviour when it came to chicken, with 45% of respondents reporting that they always or usually washed chickens before cooking them.

Three weeks ago, the FSA revealed contamination rates for supermarkets, finding that 70% of chickens on sale in the UK tested positive for Campylobacter – the most common cause of food poisoning in the UK.