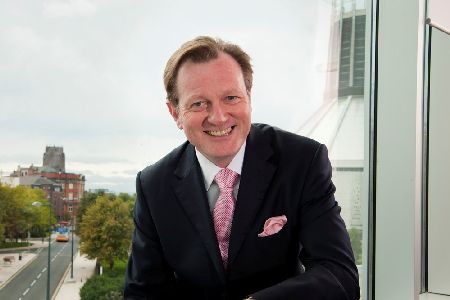 Provost and EPVC for the Faculty of Health and Life Sciences, Professor Ian Greer

The Chancellor of the Exchequer, George Osborne, has announced that University of Liverpool Provost and EPVC for the Faculty of Health and Life Sciences, Professor Ian Greer, will lead the development of the ‘Health North’ initiative.

Professor Greer, who is Chairman of the North Health Science Alliance, will work with Life Sciences minister, George Freeman, to help unlock future medical innovations that will build on the health science expertise and teaching hospitals of the North.

New developments in healthcare increasingly rely on the sophisticated use of big data and a highly personalised approach to medicine, where doses and drugs are personalised to each individual patient.  There are also increasing moves towards e-health where patients are able to use apps to manage their own health.

Professor Greer said: “We want to realise the potential in the North to deliver better health care. In the future this will be about the better use of medicines with greater effectiveness and fewer side effects by integrating data on the individual patient and their disease to identify the best treatment for them.

“The sophisticated use of linked health data, will lead to the use of medicines in a far more precise and personalised way. Across the North our research institutions and hospitals have world leading expertise in these fields.

“We now have the ability to build and combine those strengths so that we can quickly and fully exploit the potential of the North to deliver a step change in patient care.”

The Prime Minister and Chancellor have set out their six-point long-term economic plan for the North West, highlighting what has been delivered, what is underway, and the next steps in building a northern powerhouse that enables the region to reach its potential as a driving force in the UK economy.

George Osborne said: “The economy of the North West is growing, creating jobs, and doing so more quickly than other parts of the country. That has not, frankly, been the case over much of the last 30 or 40 years, as our economy has become more unbalanced, and the gap between the economic performances of the north of England lagged behind that of London and the South.

“Our message today is that is not inevitable, it is not something we should accept; it is instead something we have in our power to overcome.”

Moves to develop ‘Health North’ follow the significant science investments across the North announced by the Chancellor in the Autumn Statement 2014, including the Henry Royce Institute. Based in Manchester, with centres in Liverpool and Sheffield, a quarter of a billion pounds is being invested in the institute to build on the North’s expertise in advanced materials.