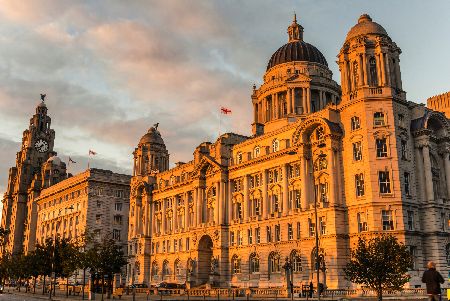 Liverpooli is a "global player"

Professors Stephen Holloway, Provost for Innovation, and Michael Parkinson, adviser to the Vice-Chancellor, both members of the University of Liverpool’s Heseltine Institute, discuss working to create a competitive Liverpool City region, following the Government’s call for ‘big ideas.’

“There is a great tide turning in the UK. The impact of the Scottish referendum and the rise of UKIP have posed powerful questions about the way we run our affairs, the way the state is organised and the powers, responsibilities and resources that different parts of our country have. The genie is out of the bottle on devolution and the major political parties are vying to attract the support of the North.

The UK government, for example, has called for big ideas about the future economy of the North. In particular, the Chancellor has called for Liverpool City Region to tell him what powers and resources they want in return for changes in the way it runs its affairs. So this is a crucial moment, and Liverpool City Region must seize the opportunity to identify a clear long-term economic plan that all the key partners can sign up for and work together to deliver.

The University of Liverpool (UoL) is determined to play a full role in this process. We already make a huge economic contribution to Liverpool City Region through the research we do, the ideas and innovations we create and commercialise, the 26,000 students we educate on campus from the UK and abroad, the almost 5,000 people we employ and all the goods and services we buy from city regional firms.

Of course the University is a global as well as a local player. Our researchers are tackling some of the world’s largest challenges – developing lifesaving treatments and creating new medicines that can be personalised to improve their effectiveness; creating revolutionary materials to combat climate change; producing new foods to tackle obesity; investigating new energy sources and exploring the potential of biological tools to replace damaged tissue.

Our international profile, in turn, helps Liverpool develop international trade and investment. And, although global, we remain deeply rooted in our local community and want to help make Liverpool become an exciting, innovative and successful 21st century economy.

We play a big part in many of the city region’s economic development organisations, holding key positions in for example the Local Enterprise Partnership, the Mayor’s Knowledge Quarter Development Zone Board and Daresbury Science Park. And, as a major city centre institution, we make a huge contribution to the overall place quality of the city, and so increase the prospects of national and international investment.

In future the University will address two critical challenges we face in Liverpool and the wider Northern economy. First, how do we combine research and innovation to create new higher level jobs and enhance our international competitiveness? Second, how do we attract, develop and retain the best global talent to grow our skills base and create the industries, services and jobs of tomorrow?

The University already has some crucial facilities which help. And it has more innovative projects and ideas which link the world of education, research and industry to meet major social challenges.

The Centre for Global Eco-innovation (CGE)

The CGE is a UK market leader for SME-led innovation and high-level skills development in the areas of low carbon, sustainability and energy, led by UoL, Lancaster University and Inventya Limited.

The CGE is pioneering the development of energy and resource-efficient products and services that will increase the global market share of our SMEs.

At its heart is a team of 50 graduate students working on intensive three-year collaborative research and development projects with North West SMEs.

The University is involved in three new initiatives which will make similar large contributions to Liverpool’s economic welfare.

Our strategic relationship with Unilever is an international benchmark for successful HE-business collaboration. This unique relationship is now creating an unparalleled suite of state-of-the-art, open-access facilities: the Materials Innovation Factory (MIF).

This will co-locate more than 130 university and 130 industry researchers in a £37m building opening in 2016. The MIF will provide an advanced research environment to facilitate collaboration, networking and knowledge exchange.

Its creation creates a new paradigm for university industry collaboration in the UK. It will significantly extend the UK research base promoting economic growth and providing outstanding faculties for the education of graduate students and young researchers.

Sensor City in the Knowledge Quarter

Sensor City was chosen as one of four UK University Enterprise Zones in July 2014 – and one of only two in the North. And it is the only one which is led jointly by two Universities – UoL and our partner, Liverpool John Moores University. With a £5m award from BIS and additional investment of £10m, Sensor City will establish a unique sensor- systems business incubator at a bespoke facility in Liverpool’s Knowledge Quarter, positioning Liverpool as an internationally-leading centre for the development, manufacture and spin-out of new sensor systems.

Over a 10-year period, it will create a cluster of 300 new businesses and more than 1,000 jobs in emerging technologies.

The Chancellor’s Autumn Statement also designated the University one of the satellite hubs of the Sir Henry Royce Centre for Advanced Materials Research and Innovation, a multi-million pound initiative, based in the University of Manchester, designed to attract world-class scientists and technicians to the North.

The University also made two innovative proposals to the Northern Futures consultation to improve the innovation and economic competitiveness of Liverpool City Region.

The University pressed the government that Government locate the innovative UK Precision Medicine Catapult in the North. The Catapult would build world-leading critical mass, deliver a step change in economic opportunity, and enable the North – and the UK – to punch its weight on the global stage. It would act as a rallying point to enable the linkages between biopharma, diagnostics and healthcare systems.

Keeping talented people is as crucial as creating new firms and jobs. So we also proposed to government that we should develop an Innovation Co-operative to draw in and connect the best student minds and research expertise with business innovators in critical, leading-edge technologies.

Located in the Knowledge Quarter, the Innovation Co-operative would be designed to advance business-led training, encourage cross-disciplinary collaboration and foster entrepreneurship to deliver a step change in our skills base and a rapid flow of talent into the economy.

Working with knowledge businesses across the North, highly-skilled graduates would be embedded within – and enhance – the ‘innovation ecosystem,’ becoming an integral part of a vibrant economy and delivering new products, services and growth.

The University of Liverpool is already a major economic player. It is determined to contribute even more in future by encouraging innovation, commercially exploiting its research and attracting and retaining talented people. We are excited to be part of this great opportunity for Liverpool.”