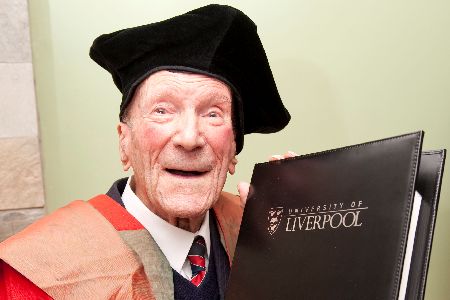 Hugh Greenwood, honorary graduate of the University, was a successful businessman. Over the past fifty years or so, he used his wealth with unstinting generosity to support, through extraordinary acts of charity, the development of children’s medicine throughout this country.

He helped support developments in medicine internationally, notably funding a medical school in the Philippines and supporting the training of doctors and nurses in Africa through generous donations to the British Association of Paediatric Surgeons.

Hugh made outstanding personal contributions, through his Children’s Research Fund, to child health in London, Glasgow, Leicester, Exeter, Birmingham, Southampton, and Manchester. The people of Merseyside, and not least the University of Liverpool, will remember him for the research and treatment facilities that he has helped to create in the University’s Department of Child Health, including its original building on the Alder Hey site.

Hugh was born in Waterloo on Merseyside in 1912. He hardly knew his father, who died in the First World War at sea on his way to the Dardanelles, on 4 May 1917. His mother had four children to bring up, three boys and a girl, two other girls having died in infancy. These losses were to have a momentous influence on Hugh in later years. Hugh left Bootle Secondary School at sixteen, and worked first as a local reporter. He then studied Accountancy and got a job in the City of Liverpool.

Still only eighteen, and backed up by nothing but his own initiative and drive, in the early 1930s he leased land and, with the shrewd assistance of a far-sighted Manager at the District Bank in Warrington, he was soon registered as a limited company in property and construction.

By the outbreak of the Second World War, Hugh had already built more than 200 homes for rent. His company, Greenwood Brothers, founded in 1936 and still going strong today, was given a contract by the Ministry of Works during the war to maintain key military properties right across the North West.

After the war the business enjoyed further rapid growth, and went from strength to strength over the next fifteen years. It was in 1962 that a chance encounter turned Hugh’s thoughts in the direction of children’s health. In that year he was invited to advise Great Ormond Street Children’s Hospital on some building work. During the inspection visit Hugh fell into conversation with a Senior Medic at the Hospital, Professor Moncrieff, who happened to let drop the fact that the Hospital was badly in need of money to carry out its work to best effect. This touched a powerful chord in Hugh, who had never forgotten his two sisters who had died very young.

Here was an opportunity to help prevent such tragedies from happening to others. He had money; and so began a remarkable history of enlightened and utterly selfless charitable giving, on a very significant scale. He immediately initiated a substantial annual gift to the Hospital, which was continued for many years. News of this generosity spread to Hugh’s home town of Liverpool, and a dialogue ensued which culminated in a gift to the University of Liverpool to build a new Institute of Child Health, which was duly opened by Lord Rhodes in 1967.

By now a pattern of charitable donations to fund child-related medical research was well-established, and through Hugh’s Children’s Research Fund, ventures in many leading hospitals and universities around the country came to benefit greatly.

Hugh Greenwood was honoured with an OBE in 1976 in recognition of his charitable services to medical research. His donations have made a material contribution to improving, and saving, the lives of sick children in the city, and his vision and generosity of spirit in making possible major capital developments has ensured that the University’s activity in medical research has enabled more general benefits for sick children everywhere.