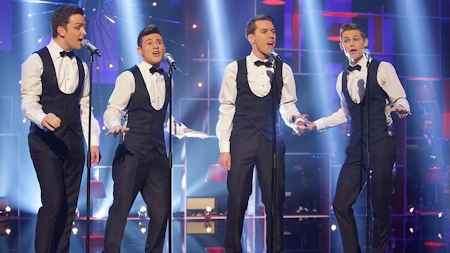 Two University of Liverpool students have been crowned the 2014 National Youth Quartet Champions at the British Association of Barbershop Singers (BABS) competition.

The group, which has only been singing together since March last year, was also one of seven acts in BBC One’s Frank Sinatra: Our Way, a competition to find unknown singers to sing at a Sinatra centenary concert.

Their BABS-winning performance included an arrangement of Charlie Chaplin’s Smile and a medley of Herman’s Hermits’ Something Tells Me I’m Into Something Good and The Turtles’ Happy Together.

In addition to snatching 1st place in the youth contest, the boys took 11th place in the overall competition out of around 50 other competitors, including the regular and senior contest which contained much more established groups.

The group narrowly missed out on qualifying for the international quartet championships in in the US, although they have high hopes for 2015.

Watch Proper Sound’s version of Come Fly with Me, as performed on BBC One, here: