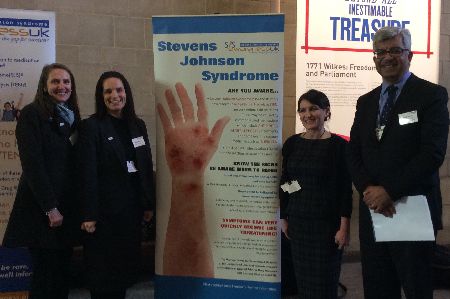 Professor Munir Pirmohamed, Director of the Wolfson Centre for Personalised Medicine, is supporting Stevens-Johnson Syndrome awareness UK in their bid to receive government support for a national campaign aimed at educating more doctors and patients about a severe adverse drug reaction that effects the skin.

The campaign has been presented at an event at the House of Commons, hosted by Labour MP Margaret Hodge.

What is Stevens-Johnson Syndrome (SJS)?

“Many drugs cause skin rashes. They are usually mild, and resolve very quickly with drug withdrawal. The commonest mild skin rash caused by drugs is termed a maculopapular exanthem (MPE). In some cases, however, the rash can progress rapidly to a blistering condition, which also affects the mucous membranes (mouth, eyes, nasal passages, urethra, gut). When blistering develops, it is similar to having 3rd degree burns of the skin.” SJS can result in 1-10% of body surface area blistered.”

Which drugs cause SJS?

“The most commonly implicated drugs include anti-epileptic agents, non-steroidal anti-inflammatory agents (such as ibuprofen), anti-HIV drugs and penicillin. It is also important to note, however, that it is sometimes difficult to implicate a particular drug (especially if a patient is on multiple drugs) and the conditions can also be caused by viruses.”

Which patients are susceptible to these conditions?

“The majority of patients prescribed these drugs do well on them, but in rare cases, patients develop SJS or Toxic Epidermal Necrolysis (TEN – 30% of the body surface is blistered). The overall incidence of TEN is about 1 case per million patients per year, and so in the UK about 60 cases occur every year. SJS is more common with an incidence of about 1 in 10,000 exposures, but this varies according the drugs used.”

How does the reaction occur in the first place?

“Another aspect of our research focuses on determining how these reactions occur. It seems that the body’s immune system, in those individuals who are predisposed, attacks the skin cells leading to blistering. This research involves a lot of sophisticated techniques in the laboratory using cells from patients to understand what is different about their immune system, and how their immune cells recognise the drug which caused the reaction.

“The work, which is aimed at understanding the mechanisms of SJS/TEN, is important for several reasons, including providing a new diagnostic test to allow doctors to identify patients who will progress to more severe reactions.”

What research is being done at the University of Liverpool?

“Genetic factors are important in predisposing patients to SJS/TEN from certain drugs.  For example, in Chinese patients a gene called HLA-B*15:02 predisposes to SJS/TEN with carbamazepine, a widely used antiepileptic drug. It is now usual clinical practice in countries such as China and Taiwan to offer testing for this gene if a patient is to be prescribed carbamazepine.

“In Northern European populations we have shown that another gene, HLA-A*31:01, predisposes to different types of skin reactions, including SJS/TEN, with the same drug carbamazepine. Our research shows that it would be cost-effective to test patients for HLA-A*31:01 before starting carbamazepine, but the test is not used in the UK at present.”