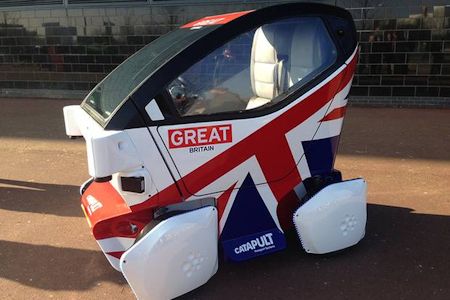 Drivers will be passengers in their own cars by 2030, a government report predicts

Dr Louise Dennis, from the University’s Centre for Autonomous Systems Technology, comments on news that the Government has announced a review of the Highway Code and MOT test guidelines in order to accommodate the imminent appearance of driverless cars in the UK.

“Four trials of driverless car technology have been announced in Greenwich, Bristol, Milton Keynes and Coventry.

It is almost certain we will be seeing greater autonomy in vehicles on the road in the next decade from intelligent cruise control systems, autonomous parking systems, and automated convoy systems possibly up to fully self-driving vehicles.

Given a computer’s ability to make rapid calculations, measure distances more accurately than a human can by eye, and remember details such as stopping distances it is reasonable to hope that a revolution in driverless cars will make our roads much safer.

They will also provide welcome greater independence to the many people who are unable to hold a drivers’ license.   They may even help reduce congestion.

While the hope is that the technology will improve safety and widen access, we obviously want to be certain that the technology for detecting and avoiding obstacles is reliable enough to avoid accidents; that the cars have the reasoning ability necessary to follow the highway code, taking account of road signs, diversions and the behaviour of other vehicles; and that they have the capability to resolve the complex dilemmas that can arise in real life driving situations (such as choices between hitting something in front of them and braking suddenly and causing a collision with the car behind them).

One way to reassure ourselves of such things is to extensively test the technology. The trials in Coventry, Milton Keynes and Greenwich will involve slow moving “golf cart” type vehicles operating in pedestrianised areas. This will provide the researchers with a wealth of data about the complexity of the real world in which they operate while minimising the risk that someone can get hurt.

At the Centre for Autonomous Systems Technology in Liverpool we have been looking at techniques that can be employed alongside testing.

We’ve worked with a variety of autonomous systems, not just driverless cars but also unmanned aircraft and healthcare assistants in the home. We study complex simulations of the system’s behaviour and also perform mathematical proofs on the program code to show that it always behaves in particular ways.

We believe that the processes of proof, simulation and testing should be linked so each informs the other and together they build up a body of evidence about the behaviour of a system.

As well as computer scientists and engineers, the centre includes researchers from Philosophy, Law and Psychology who are interested in exploring ways such driverless cars (and similar systems) can resolve ethical dilemmas, how our legal systems need to be updated (for instance to account for liability), and how such systems can be used around humans in order to minimise confusion and, potentially, accidents.

All this research can lead us to understand better what properties we need to test, simulate and prove in order to ensure that driverless cars are safe, ethical and legal.”