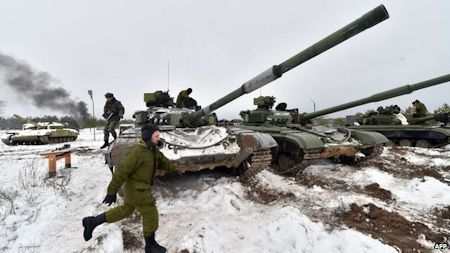 Erika Harris is a Professor in the Politics Department at the University of Liverpool and co-director of the Europe and the World Centre.

“A fragile ceasefire deal is just about holding in Ukraine, but hopes for its long-term success are not high. It is clear that the war for eastern Ukraine is far from over. And most ominously of all, it bears many of the hallmarks of one of 20th-century Europe’s darkest moments: the breakup of Yugoslavia.

The post-communist transitions to democracy in the early 1990s saw a massive resurgence of identity politics. As ideological and political frameworks collapsed across the eastern bloc, ethnicity and history once again became tools for mobilising political support, and for justifying political and territorial demands.

This resulted in the disintegration of all three multinational communist federations, the Soviet Union, Czechoslovakia and Yugoslavia, and the creation of a glut of newly independent states – all equipped with new national narratives and versions of history. Anxious citizens of the new states suddenly found themselves members of minority groups, caught on the wrong side of new borders.

In the former Yugoslavia, these dynamics combined with the echo of earlier struggles resulted in a vicious ethnic war.

Disturbingly, the conflict in Ukraine is taking place in an all too similar context.

Once again, a semi-authoritarian and increasingly nationalist Russia, with much diminished power and status, is seeking to redress its position and secure some remnant of a sphere of influence around its borders, and the “national question” has become a cornerstone of Russian foreign policy.

As Moscow now sees it, the Russian nation is much larger than Russia’s borders imply; it extends to wherever Russian speakers live on the territory of the former Soviet Union. That means Russia can justifiably act as their protector in other states. The now “frozen” conflicts in Nagorno-Karabakh, Abkhazia and South Ossetia and the recent annexation of Crimea all fit into this policy.

Viewed from this mindset, the post-communist Ukraine born in 1991 makes little sense, and offers a deep crisis for Russian nationalists and separatists to exploit.

It is made up of regions which have never before been united within one independent state, and it is still struggling with the dire economic legacy of communism and subsequent corrupt post-communist governments. It is politically and institutionally weak, and still in pursuit of a clear place in the world. Its population is divided on what that place ought to be.

This is a very dangerous confluence of history and ideology. What we’re seeing in Ukraine is a delayed knock-on effect of the disintegration of the Soviet Union – and it has all the features of ethno-national conflicts which exploded most dramatically in the former Yugoslavia.

As in the former Yugoslavia, the conflict between Russia and Ukraine revolves around the borders of a newly independent state, which include a previously dominant linguistic minority.

Just as ethnic Serbs did after the disintegration of Yugoslavia, eastern Ukraine’s Russian speakers find themselves outnumbered, and on the sharp end of decisions that exclude them from the national culture – in this case, the Ukrainian government’s fumbled attempts to downgrade the Russian language from official status in Russian speaking regions.

The national question has become the rhetoric and reality of Russian foreign policy. It contains all the provocative vocabulary of a “mother” country protecting its ethnic kin beyond its borders.

And just as in the Serbo-Croat war, we are seeing declarations of statehood from separatist republics (along the lines of Republika Srpska in Bosnia and the later dissolved Serb Republic of Krajina on the territory of Croatia). Further, there is the formation of “statelets” that would have no existence without the support of “mother Russia”, and the use of “volunteer” fighters from Russia.

There are even voices raising notions of a possible greater New Russia (or “Novorusko”), encompassing two self-declared People’s Donetsk and Luhansk Republics and Crimea.

The longer the conflict continues, the number of actors on the ground is only growing. The current ceasefire (should it hold) may be in the interest of the international community and perhaps even Putin’s government, but it’s not necessarily in the interest of Ukraine’s increasingly radicalised groups and their myriad aims.

There are differences, naturally: unlike Serbia, of course, Russia is a massively powerful state, a nuclear power and a veto-holding member of the UN Security Council. For all its economic troubles, Ukraine is a much stronger military state than Croatia, and it can probably defend itself against the type of operations that Russia is currently conducting in Ukraine.

But still, to stop Ukraine taking the catastrophic Yugoslav route, the outside world must take the ethno-national aspects of the conflict seriously. This delayed disintegration of part of the post-Soviet sphere is no less toxic for having taken so long – and there may have to be more ceasefires in order to prevent the repetition of some of the worst events in Europe since the Cold War ended.”

This article was first published in The Conversation.

4 thoughts on “Viewpoint: Despite ceasefire, Ukraine could be going the way of Yugoslavia”