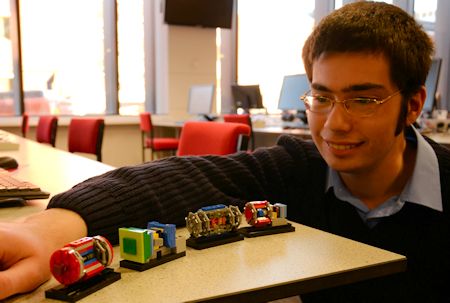 A PhD student from the Department of Physics is looking for public votes to have his Lego bricks model of the Large Hadron Collider (LHC) manufactured by the company.

The design uses existing Lego pieces to replicate ATLAS, ALICE, CMS and LHCb which make up the LHC. Each design uses cutaway walls to reveal all of the major subsystems.

Nathan Readioff is in the third year of his PhD and is currently based at CERN, the European Particle Physics Laboratory in Geneva, where he is studying the Higgs Boson using data from the ATLAS detector.

He has submitted his LHC models to the Lego Ideas proposal website where ideas from members of the public, which attract over 10,000 votes, are considered by Lego for future production.

Nathan said “I was inspired after seeing a large model of ATLAS designed by Dr. Sascha Mehlhase, which uses more than 9,500 pieces and takes about 35 hours to construct.

“I have always been a Lego fan and I wanted to take things to the other extreme by building the smallest possible ATLAS detector.

“I had in mind Lego’s basic principles of encouraging imagination and play through building bricks.

“After I had designed the ATLAS detector I was inspired to make the other three detectors to complete the set. I have even designed miniature models of the dipole magnets used in the LHC to build a representative accelerator ring.”

Nathan has compiled easy-to-use instruction booklets which provide a step by step guide to making the miniatures, together with short summaries of how their real-life counterparts work and what they are used to study.

The Lego models are already popular with the outreach teams at the University and at CERN who are keen to use them to explain to children about the LHC and its work investigating some of the most fundamental mysteries of the universe, from anti-matter to dark matter and the search for extra dimensions.

The LHC is the largest and most powerful particle accelerator in the world. Its 27 km ring is buried 100 metres below the French and Geneva countryside. The LHC uses the world’s largest and most complex scientific instruments to study the basic constituents of matter.

Liverpool scientists have been major contributors to the LHC’s ATLAS experiment from the start. One of the tracking detectors that sits at the heart of ATLAS was constructed at the University’s Semiconductor Detector Centre.

If you want to find out about studying Physics at the University of Liverpool please visit the study pages.